In favorable circumstances, the solid state MAS NMR spectra of spin I = n/2 quadrupolar nuclei can show a strong central transition (free of spinning sidebands) and the satellite transitions in an extended spinning sideband manifold. Although the central transition is very strong, it is often broadened out significantly by the second order quadrupolar interaction. This broadening often presents resolution problems when more than one site is present. The problem can of course be reduced by going to higher magnetic field strengths where the second order interaction is reduced. If this option is not available, it is sometimes advantageous to look at the satellite transitions which can be affected to a lesser extent by the second order quadrupolar interaction and therefore exhibit narrower lines. Such is the case for the first satellite transition for 27Al. The problem is that since the satellite transitions are spread over a very large sideband manifold, any one sideband is of very low intensity. It is desirable to add the intensities of all of the sidebands into the 0th order sideband. This is conveniently accomplished by taking advantage of the Nyquist sampling theorem and collecting the data in simultaneous mode without digital filtering. If the dwell time is made equal to a single rotor period (i.e. the spectral width is set to one half of the spinning speed) and the analog filter bandwidth is maximized, the sidebands of the satellite transitions will all fold into the 0th. order sideband. If the magic angle is set very precisely, in the case of the first satellite transition of 27Al, the intensity of this sharper line is greater than that of the central transition. Further, the central transition can be suppressed with a double quantum filter (Ashbrook and Wimperis, Journal of Magnetic Resonance, 177, 44 (2006)) to produce a clean spectrum with a much sharper line than the central transition. This is illustrated for the 27Al MAS NMR spectrum of Al(acac)3 in the figure below. 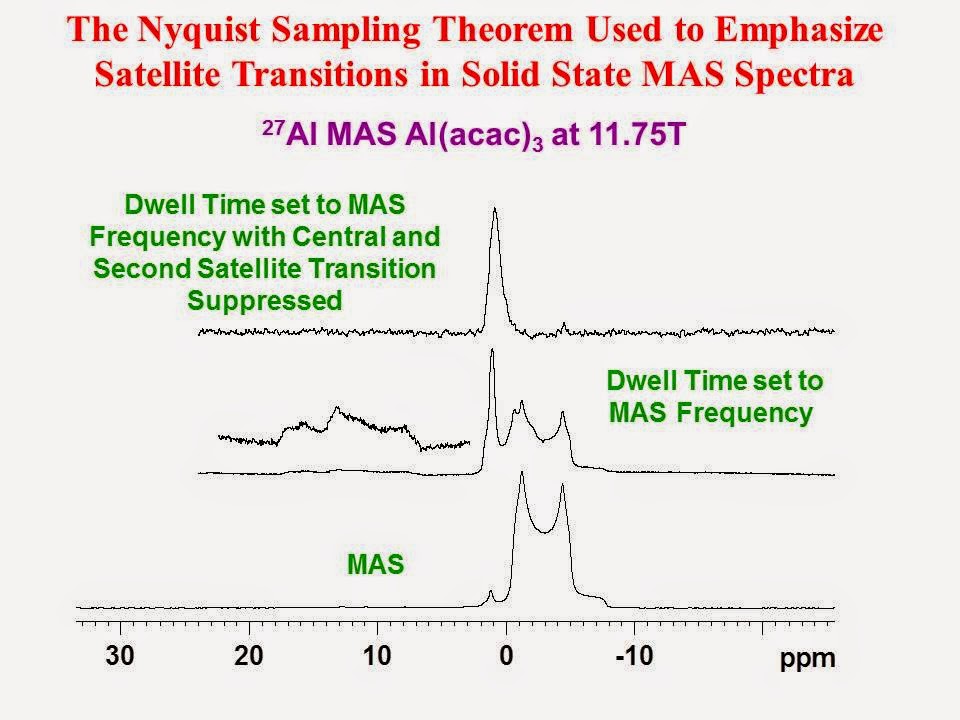 Hi Glenn, I want to try this idea on a sample with large CSA on Bruker Avance III. I set the DIGMOD to analog and used qsim (simultaneous acq) to get the fid, which should deactivate the digital filter and use the analog one instead. However, when I changed the analog filter width (FW)(larger, equal or smaller than sw), the intensities of SSB barely changed. Have you any idea about this?

Hi Brian,
I collected this data 9 years ago on an AVANCE 500 spectrometer equipped with an older style receiver. I have tried this on more modern Bruker instruments with DRU's but (like you) I was unable to succeed. I ended up using this processing method instead: