The Consequence of Locking on the Wrong Solvent

Most often, running an NMR spectrum in automation requires only two pieces of information from the user, namely, the NMR experiment to be performed and the deuterated solvent used to dissolve the sample. With such a high demand on the user (this is meant to be scathingly sarcastic), there are bound to be errors in the input. If the user declares the wrong solvent, one of two things may happen. Firstly, the spectrometer may not be able to establish a deuterium lock and will report an error and not run the sample. Secondly, the spectrometer may be able to establish a lock despite the fact that the deuterium signal is off resonance. If the lock is established, the field strength will be set to a value appropriate to put the declared solvent signal on-resonance. When a proton NMR spectrum is collected, the chemical shift scale will be incorrect by an amount equal to the proton chemical shift difference between the true solvent and the declared solvent. This is illustrated in the figure below. 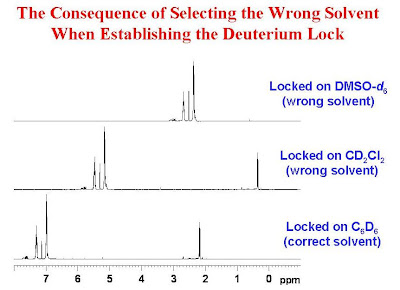 Is it too much to ask for users to set the chemical shift reference themselves during processing? Or am I missing something...

Dave,
Its not just a problem with chemical shift referencing. Students are asked to declare a solvent so the spectrometer will "know" the correct field value to use to put the deuterium line of the solvent on-resonance. It is important for the deuterium line of the solvent to be on resonance for the automatic shimming to work well. In my view, the user is lucky to get anything at all if they declare the wrong solvent as often the spectrometer will not be able to "find" the lock signal at all and the sample will not be run in automation. Furthermore, even if the correct solvent is declared, the chemical shift reference should be checked and set manually by the user, as it is rarely at the desired precision. So.... no, its not too much to ask that the user reference the spectrum during processing (althogh I'm sure many do not) but it is very important to declare the correct solvent.

The most interesting starts when you try to heat up the sample. The D2O signal shifts about -0.1ppm/10°. As a result you will see in the spectrum the water line remaining at the same position, but all the rest lines shifting downfield. This in fact will still be convenient since the water line will be kept at the transmitter frequency for the suppression methods.