There is no sound more pleasing to a solids NMR spectroscopist than that of an MAS rotor spinning stably. What happens though when the spinning is abruptly interrupted? This is called a rotor "crash" and when it occurs not only is the pleasing sound replaced by the horrible sound of rushing air, but one often finds damage to both the MAS rotor and the NMR probe. The picture below shows what used to be the solenoid coil of a 4 mm MAS probe after an unfortunate rotor crash. The rotor and sample were reduced to dust. Fortunately in this case the stator was not destroyed. 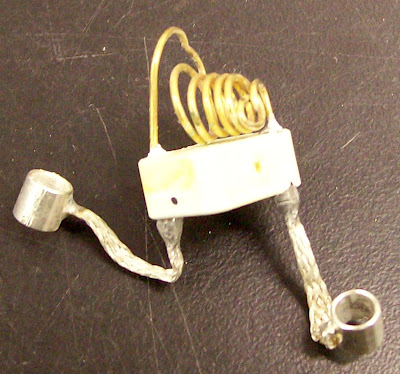 Here are a few tips to avoid expensive rotor crashes:


2. Check the integrity of the rotor and the cap before use. Damaged rotors are weakened and should NEVER be used. Damaged caps can cause instability which may lead to a rotor crash.


3. Make sure the cap fits snugly on the rotor. A cap that lifts or comes off the rotor while spinning will cause a rotor crash.


4. Be aware of sample heating due to spinning. The rotor and sample heat up during spinning due to friction. If the temperature increases such that your sample melts or emits a gas, the rotor may become unbalanced or the cap may be forced off causing a rotor crash.


5. Make sure the rotor is marked properly so the speed can be monitored and regulated. Failure to do this may result in the spin counter receiving a bogus signal and it is possible that the rotor may spin faster than its rated speed causing a crash.


6. Pack your sample evenly to ensure that the rotor is properly balanced during MAS. Rotors that do not spin smoothly and stably should be repacked until they do.


7. Start and stop the rotor gradually to ensure stability while speeding up or slowing down.