Broadband X nucleus decoupling (X = 13C, 15N, 31P, 11B, 19F etc.....) is frequently used in 1H detected 2D HSQC/HMQC data collection or in standard 1D 1H spectra to aid in structure assignment.  When broadband decoupling schemes are used, one must keep in mind that they are not infinitely broadbanded.   They have finite bandwidths over which they are effective thus limiting the chemical shift range for the decoupled nuclide.  The effective bandwidth depends on the particular decoupling scheme and the decoupling power used.  If multiple peaks are to be decoupled, one must insure that all peaks are within the decoupler bandwidth.  One can determine experimentally the effective decoupling bandwidth by running a series of 1H spectra varying the decoupler offset frequency.  Such a measurement is shown in the figure below for the P-CH3 methyl resonance of dimethyl methylphosphonate. 300 MHz 1H [31P] NMR spectra were collected in a pseudo-2D fashion, incrementing the decoupler offset frequency from 200 ppm to -200 ppm from the 31P resonance frequency in 1 ppm steps.  Broadband GARP decoupling was employed with a power of 3125 Hz  (80 µsec 90° pulses).  The pseudo-2D contour plot is shown in the left-hand panel and a stacked plot is shown in the right-hand panel. 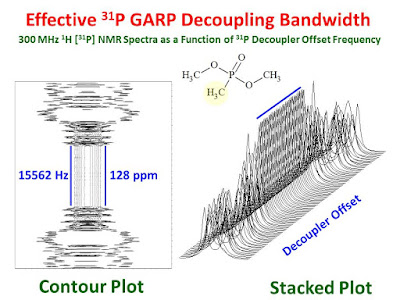 One can see that the effective decoupling bandwidth is 15.56 kHz or 128 ppm on a 300 MHz instrument.  When the decoupler offset exceeds ±64 ppm from the 31P resonance frequency, one obtains distorted line shapes.  Representative distorted line shapes are shown in the figure below.  The bottom spectrum was collected with no 31P decoupling.  The top, fully decoupled spectrum was collected with on-resonance 31P GARP decoupling.  The middle spectra, highlighted in pink, are representative distorted spectra outside of the effective decoupling bandwidth. 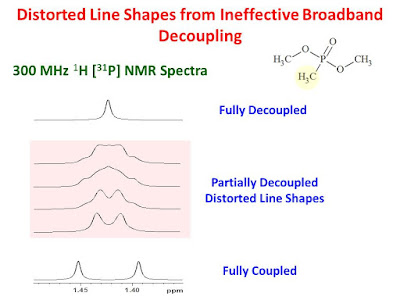 If one is not aware of the decoupling offset and available bandwidth, one may obtain misleading line shapes subject to misinterpretation.
Posted by Glenn Facey at 1:22 PM No comments:

Some common household products contain many NMR active nuclides able to provide information on the identify the major components of the product.  Toothpaste is such an example.  It contains abrasives, surfactants, cleansers, fluoride, sweeteners, foaming agents, flavors, etc.... A survey of some of the NMR active nuclides can reveal the major components.  The figure below shows the 19F, 31P,  23Na, 13C and 1H NMR spectra of a D2O slurry of Crest Complete toothpaste acquired on a 300 MHz spectrometer as well as the 29Si CP/MAS NMR spectrum of a sample of dried Crest Complete toothpaste, collected on a 200 MHz spectrometer.  Except for the 29Si CP/MAS spectrum, which was collected over several hours, all other spectra were collected in a matter of minutes. 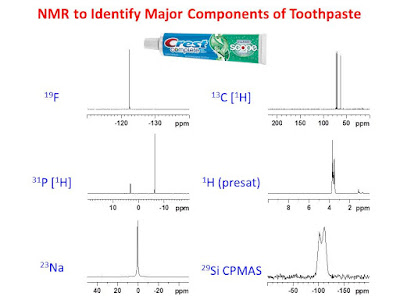 The 19F spectrum is consistent with the fluoride ion which is a well known agent for preventing tooth decay.  The 31P spectrum collected with 1H decoupling shows two major peaks consistent with diphosphate and phosphate anions.  Salts of these anions are used as water retention agents, stabilizers and emulsifiers.  The 23Na spectrum shows a single peak consistent with sodium cations, balancing the charge for the fluoride, diphosphate and phosphate anions.  The 13C and 1H NMR spectra show one major component consistent with sorbitol, commonly used as a sweetener.  Other minor components are evident in both the aliphatic and aromatic regions of the 1H and 13C spectra.  The 29Si CP/MAS spectrum of the dried toothpaste is consistent with silica, which is used as an abrasive.  The two peaks are due to Q4 (Si(OSi)4) and Q3 (Si(OH)(0Si)3) silicon sites.  It should be noted that there are many other components including flavoring agents, coloring agents and preservatives present in concentrations which would require much more time and attention to identify.
Posted by Glenn Facey at 3:04 PM 1 comment: