Recently, I had a problem with an MAS probe which would no longer allow measurement of an MAS spinning frequency.  I thought it might be instructive to describe the device and the steps I took to solve the problem.  An MAS spin detection device includes an IR LED source, an IR detector, a fiber-optic cable (split in two on one end), some electronics and an MAS speed controller.  Everything except the the MAS speed controller is shown in the figure below.

Almost all of the light should pass through the fiber-optic cable.  Another possible problem could be a failing IR LED emitter.  Unfortunately, the IR light is not visible so you cannot just inspect it visually.  The IR light can however be detected by the front facing camera of an iPhone which does not have a built-in IR filter like the rear-facing camera.  Simply taking a picture with the front facing camera will indicate whether the emitter is working.  This is shown in the figure below, where the emitter is clearly visible when the spin detector receives power from the MAS speed controller but not visible when not connected to the MAS speed controller. 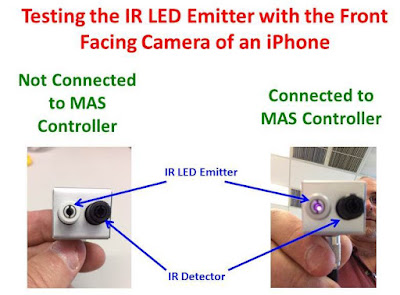 There could also be a problem with the detector.  This can be tested with a stroboscopic LED flashlight as shown in the figure below. 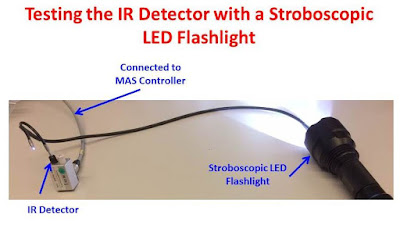 The strobe light is positioned at the end of the fiber-optic cable and one of the split ends is positioned at the detector.  When the spin detector is connected to the MAS speed controller, one should be able to observe the frequency of the strobe light on the rotor frequency display.  Other possible problems could be with the MAS speed controller or with the electronic cable.  I have two MAS probes for this instrument.  In one probe, the MAS spinning frequency could not be counted and in the other probe it could.  In the failing probe, the fiber-optic cable, IR LED emitter  and IR detector were all working properly.  The problem was with the connector on the cable between the spin detector and the MAS speed controller.  The connection was OK for one probe but not the other.  I will be happy if this post helps someone who may run into a similar problem.