Resolution During a Liquid Nitrogen Refill

Just as it is not advisable to collect high resolution NMR data during (and shortly after) a liquid helium refill, it is similarly not advisable to collect data during a liquid nitrogen fill. The figure below illustrates this point. A 300 MHz NMR spectrometer was set up to collect an NMR spectrum every minute before, during and after a liquid nitrogen refill. The resolution deteriorates as soon as the one-way valves are removed from the nitrogen cryostat. One can see that the resolution during the fill is much worse than before the fill. Even 60 minutes after the fill, the magnet has not fully recovered the resolution attained before the fill. The last spectrum of the series was collected after re-shimming the magnet and is comparable to the spectrum collected before the fill. 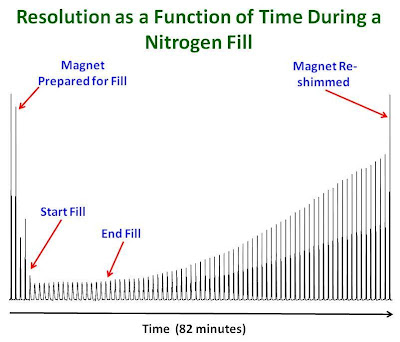 The resolution profile during a fill may be different for every magnet. For this particular magnet, it is advisable not to collect high resolution data for at least 90 minutes after a nitrogen refill.
Posted by Glenn Facey at 11:21 AM No comments:

"The Resonance" - A New Web Site from Bruker

Bruker has introduced a new web site called "The Resonance". This well organized site has NMR/MRI news, posts related to specific areas of research, hardware and software information and more. The site is frequently updated and permits posts from users. It will be a great resource for users of Bruker NMR instruments as well as those interested in how magnetic resonance is applied in research.

Posted by Glenn Facey at 9:14 AM No comments:

In order to get meaningful results from multiple-pulse NMR pulse sequences, it is essential that the 90° and 180° pulses are calibrated at the power levels used in the sequences (see this post for example). The calibrations are usually done on a standard sample in a well tuned and matched probe. The calibrations are typically stored in a file which is called up when setting up particular NMR experiments. It is important to know that these calibrations are correct for the particular sample of interest only when the probe is well tuned and matched. For samples of high ionic strength, it may not be possible to properly tune and match the probe and the 90° and 180° pulses for these samples will be longer than those previously calibrated, resulting in questionable data. In these cases, the pulses must be calibrated on the problematic sample. The figure below addresses the question of how important proper tuning and matching are with respect to the 90° pulse duration. The 1H 90° pulses for a sample HDO in a 500 MHz broadband probe were measured by the fast nutation method for various states of probe tuning and matching. In the left-hand side of the figure, pulses were calibrated for a perfectly matched probe as a function of tuning frequency. One can see that the 90° pulse is at a minimum when the probe is perfectly tuned and increases as the probe is detuned in either direction. In the right-hand side of the figure, pulses were calibrated for a perfectly tuned probe as a function of probe mismatch. One can see that the 90° pulse is at a minimum in a perfectly matched probe and increases as a function of the degree of mismatch (in units of screen divisions on the spectrometer display). It is interesting to note that the 90° pulse duration is more forgiving to mismatch than to errors in probe tuning. 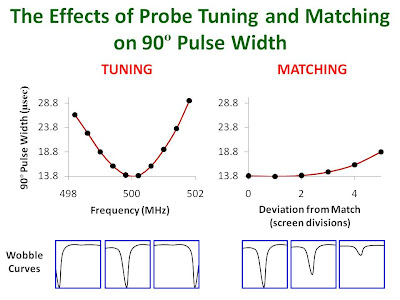 Posted by Glenn Facey at 9:35 AM No comments:

Resolution During a Liquid Helium Refill 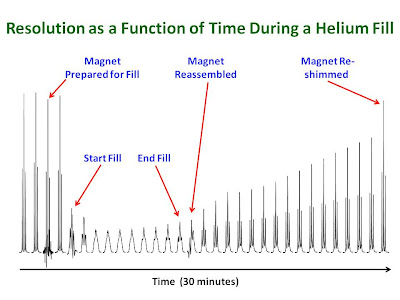 The resolution profile during a fill will probably be slightly different for every magnet. For this particular magnet, it is advisable not to collect high resolution data for at least 30 minutes after a helium fill.
Posted by Glenn Facey at 10:41 AM 3 comments: