Almost all NMR measurements rely on the correct calibration of 90° pulses. This is traditionally done by collecting a series of spectra as a function of pulse duration, finding a null for the 180° or 360° pulse and calculating the 90° pulse by simple division by 2 or 4 in the case of the 180° and 360° nulls, respectively. This determination, although trivial, can be very time consuming. Wu and Otting* have presented a much faster method of determining a 90° pulse based on measuring the nutation of a magnetization vector directly. Continuous nutation is depicted in the figure below. Here, the sample is subjected to continuous irradiation about the x axis. While being irradiated, the magnetization vector rotates in the z-y plane at a nutation frequency proportional to the pulse power. The magnetization on the -y axis is defined by a sine function. Fourier transformation of this magnetization gives an antiphase doublet centered at zero whose splitting Δν is twice the nutation frequency. The reciprocal of the nutation frequency is the time it takes the magnetization vector to rotate one complete cycle in the z-y plane and therefore the time it takes to rotate by one quarter of a cycle (i.e. the 90° pulse duration) is defined as 1/(2 Δν). The problem with continuous irradiation is that the sample must be irradiated at the same time magnetization is being detected. To eliminate this problem, a scheme similar to homonuclear decoupling is used where the radiation is turned off long enough to sample a data point. This is depicted in the figure below. 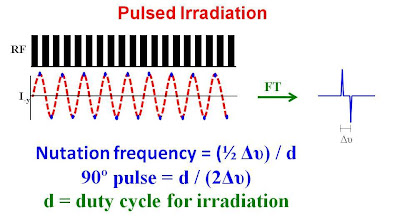 Here each dwell period is divided up into a period for irradiation and a period for detection. The duty cycle for the irradiation is the fraction of time for which the sample is being irradiated. The magnetization is sampled when the power is off. As in the case for continuous irradiation, the magnetization vector still rotates in the z-y plane however, the rotation is slower as it is scaled according to the duty cycle. The duration of the 90° pulse is d/(2 Δν), where d is the duty cycle for irradiation. An example of this is shown in the figure below. 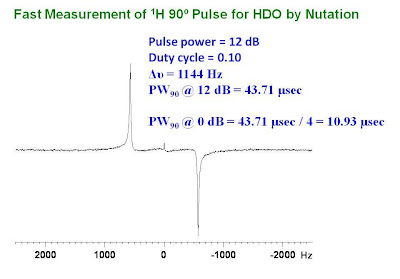 The nutation spectrum was measured for HDO using a duty cycle, d = 0.10 and a power level of 12 dB (Bruker). Since the response of the amplifiers is linear, the 90° pulses at higher power levels can be calculated. Each decrease by 6 dB cuts the duration of the 90° pulse in half. In this case the 90° pulse at 0 dB was calculated to be 10.93 µsec at 0 dB based on the measured 90° pulse of 43.71 µsec at 12 dB. This pulse agrees to within a couple of percent of that measured by the more traditional method however, the measurement took only a few seconds. You can use a program called "pulsecal" on newer Bruker spectrometers to do this in complete automation.

Glenn - I have been thinking about the spectrum you get from this experiment. Correct me if I am wrong, but this is nothing more than the result of a "real" FT performed on a sine wave? In other words, one signal is an imnverted mirror image of the other?

Also, do you know Bruker handles the duty cycle factor in this experiment, given that there would presumably be oversampling? Do you have to turn off digital acquisition and acquire in analogue?

Yes, this is just the real FT of the nutation sine wave, so the nutation frequency (taking the duty cycle into account) is one half the frequency between the peaks.

The data in the figure were collected in analog mode. I noticed that the parameter HDUTY was incorrect and I worked out the true duty cycle by examining the acquisition loop in pulse sequence.

I just have a question about the duty cycle. Can you explain exactly how that is calculated? Does it include the recycle or last delay? Or just the total time the pulses are emitted divided by the total time of the pulse and delays in between (without last delay)? This part was never clear to me.

Thank you for your questions. The duty cycle is siply the fraction of time that the power is on for the duration of the data collection. There is no recycle or last delay. You can calculate the duty cycle for a single dwell period.

Could you tell me, if I am recording proton-decoupled 13C spectra with typical 400ms AQ and D1 delay of 3.5 s and SW roughly 150ppm then what should be the duty cycle for a safe side?
Is there any limitation or relations between AQ and D1 time beyond which we can not go?

AJAY,
I am a bit confused. Your question has nothing to do with the fast determination of 90 degree pulses.
In answer to your question though .... with the typical 1H decoupler power levels used in solution-state NMR spectra, one can use a decoupler duty cycle of 100% safely.
Glenn