The Scale on an NMR Spectrum

Some people new to NMR spectroscopy have trouble with the meaning on the scales of their NMR spectra. Usually the data are plotted with a chemical shift scale (δ). This scale increases to the left and is usually reported in units of parts per million (ppm). The chemical shift of a resonance in a sample, δsample , in ppm is defined as follows:

where νsample is the absolute frequency of the sample resonance and νreference is the absolute frequency of an agreed upon reference compound. For 1H, 13C and 29Si NMR, tetramethylsilane (TMS) is the agreed upon reference standard. When the scale is plotted in this manner, the peak positions are relative to that of the standard compound. This scale is particularly useful, as it independent of a single absolute frequency and therefore does not depend on the magnetic field strength, which varies from laboratory to laboratory. Spectra recorded using magnets of unequal field strength can be compared more easily.

Scales are also plotted in frequency units (Hz), usually with the reference compound assigned a value of 0 Hz. This scale also increases to the left and is usually of use when coupling constants (which are independent of field) are being measured.


Although absolute electronic shielding values are inconvenient to measure, one may hear people refer to one resonance being "more shielded" or "less shielded" than another, The shielding constant, σ, for a particular nucleus in a particular environment can be expressed by rearranging the Larmor equation.

The shielding scale increases to the right.


In the age of continuous wave NMR spectrometers, NMR spectra were measured by irradiating the sample with continuous wave radiation and sweeping the magnetic field from a low value (on the left) to a high value (on the right). The scales were sometimes plotted in magnetic field units and one still hears about one peak being described as "upfield" or "downfield" from another. These terms have little relevance in FT NMR and should be avoided.


Some of the older literature reported 1H NMR peak positions on a τ scale. Here, τ was equal to (10 ppm - δ ) and the scale increased to the right. This is no longer in use and has caused considerable confusion. It should be avoided. 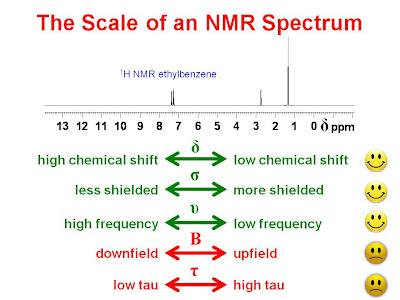 I am not quite sure what you are asking. Older NMR software used to use the spectrometer frequency as nu(reference). Newer software uses a value calculated from the lock information.

yes, this what I'm looking for NMR without locking signal..
Thanks

Thanks! Each time I think I have upfield/downfield and high/low frequency sorted out, it turns out I don't.... this post has helped a lot!

What about the vertical scale? Is this referenced to anything? Is it comparable across spectra? Is it relative to something or fixed?

Kenneth,
The simple answer is no.
Glenn

In my 13C spectra, the peak for methy group of ethyl ester (OCH2CH3) is giving doublet (J = 25 Hz) in very poor intensity (10 fold less intense, which is unusual) at 14.4 (delta) as compare with other methylene peak (OCH2CH3) whcih is at 67 (delta). Could please give your input regarding this problem.

Could you please shed light on "δ shift rage variation from one nuclei to other" ? If i am not wrong, what I understood from the different chemical shift range, for different NMR active nuclei (For eg. 1H, 13C etc..), is the field felt by particular nuclei present in the definite magnetic field (different magnetic environment).
1. What are the problems we encounter if we have long range of δ scale , particularly for generating pulse ?
2. Is there any relation between sensitivity and long shift range?

Thanks for your time and consideration!!
VNM

VNM,
It sounds as if you have poor 1H decoupling. Perhaps the proton frequency is set off-resonance, the decoupling pulses are poorly calibrated, the 1H channel of the probe is poorly tuned or the 1H channel is not putting out enough power.
Glenn

VNM,
The shift range for an NMR active nuclide depends on the electronic environment of the nuclide.
1. It is difficult to excite the complete chemical shift range of nuclides with large chemical shift ranges due to the limited excitation profile of the pulses used.
2. One is likely to encounter sensitivity issues when very large spectral widths are required.
Glenn

Hi Glenn,
Why is it that the scale increases to the left?