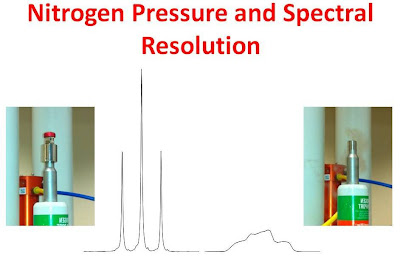 When the chemical shift difference between two J coupled nuclei is of the same order as the coupling constant, second order spectra are obtained. See this and this. One, often unrecognized, second order effect is virtual coupling which is often misinterpreted as first order weak coupling. In a three-spin system, virtual coupling occurs when the observed nucleus appears to be coupled to both of the other two nuclei even though it is only coupled to one of them. This arises in AA'X and ABX spin systems when X (the observed nucleus) is coupled to only one of the other two strongly coupled spins. This is illustrated in the figure below. 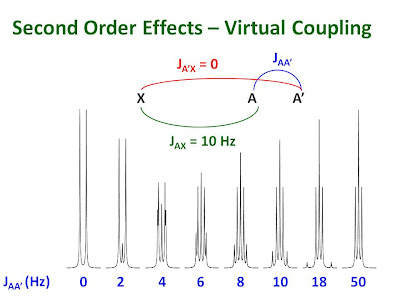 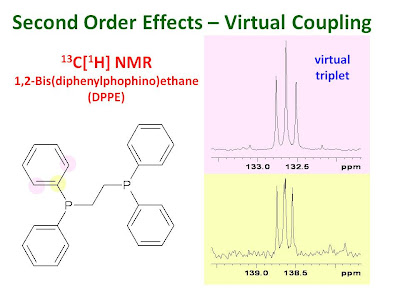 The figure shows the 13C NMR signals for the ipso and ortho aromatic carbons of 1,2-bis(diphenylphosphino)ethane (DPPE). These carbon atoms are coupled to the nearest phosphorus but not to the remote phosphorus. The two phosphorus atoms are strongly coupled to one another. The ortho carbons appear as a "virtual triplet" and the ipso carbons, a second order multiplet.
Posted by Glenn Facey at 2:15 PM 10 comments:

The Bruker Almanac for iPhone / iPod

Over the years, I have made much use of the Bruker Almanac. My bookshelf still holds several copies from the past 20 years or so. For those who have never seen a copy, it contains a great deal of useful information for NMR, EPR, ENDOR, IR and mass spectrometry. The NMR information includes, useful NMR formulas, chemical shift tables for some of the commonly observed isotopes, reference compounds, frequency tables etc... Recently Bruker has released its almanac in an iPod / iPhone app. Not only can you use your iPod / iPhone to take a course on Fourier transforms but you can also use it as an NMR reference book. The Bruker Almanac app is a very useful tool making it convenient to have a great deal of NMR information in your pocket - and at the console where it is most often needed. How often have you awakened at 2:18 am. and wondered what the chemical shift range is for 99Ru? Well .... now you can quickly look it up and go back to sleep. Below are three screen shots from the app. Good job Bruker! 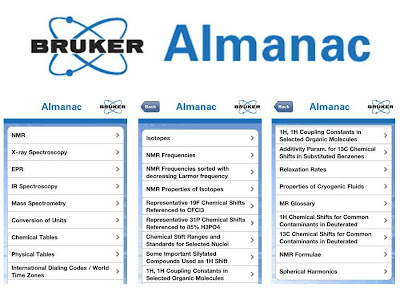 In Honor of Rod Wasylishen

Rod Wasylishen is dear to the hearts of the entire Canadian NMR community and to many worldwide. Not only are his scientific achievements stellar, but he has mentored an entire generation of Canadian NMR spectroscopists with his contagious curiosity and positive approach to research. All who have had the privilege of working with Rod speak highly of him. In his honor, his former students and colleagues have contributed to a special issue of the Canadian Journal of Chemistry - a journal Rod has enthusiastically supported throughout his career. 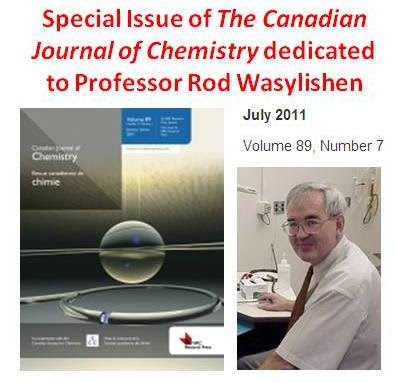 Exchange processes that occur on the NMR time scale affect the NMR line shapes and can be studied by line shape analysis. If the exchange process is slow on the NMR time scale, one can employ EXSY or inversion transfer methods to study the exchange. An alternative to these is the saturation transfer technique. In this method, one of the slowly exchanging resonances (A) is saturated with low power CW irradiation and the effect on the intensity of the resonance of the exchange partner (B) is monitored. If there is exchange between A and B during the period of saturation some of the saturation from A will be transferred to B. The change in the intensity of B will depend on both the rate of exchange, k and the relaxation time of B, T1B . If there is no nuclear Overhauser effects between A and B, then the rate of exchange is given by: 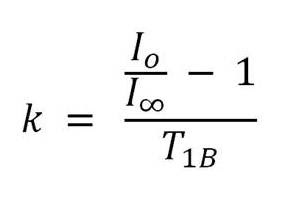 where Io is the intensity of B with no saturation of A, and I∞ , is the intensity of B when A is saturated for an infinite time. The saturation transfer effect is useful for situations where the exchange is slow on the NMR time scale but faster than (or of the same order as) T1B. An example using 31P NMR is illustrated in the figure below for a ruthenium phosphine complex which undergoes slow exchange between isomers with different modes of bonding. The 31P [1H] NMR spectrum is shown in the upper right-hand panel of the figure. In this case, the P atoms of isomer A are chemical shift equivalent and give a singlet while those for isomer B are chemical shift nonequivalent and give an AB pattern. The spectrum of isomer B is shown in the lower panel of the figure as a function of saturation time of isomer A. 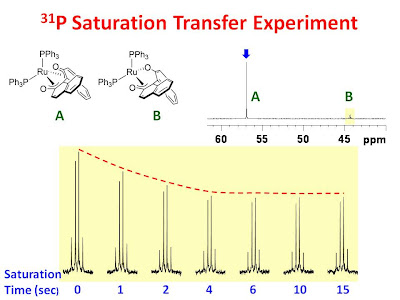 Many thanks to Carolyn Higman and Prof. Deryn Fogg for kindly allowing their data to be used in this post.
Posted by Glenn Facey at 1:28 PM 2 comments: