Sorting Out NOE's for Exchanging Rotamers

2D NOESY spectra contain cross peaks from both NOE interactions and peaks due to rotamers in slow exchange with one another on the NMR tine scale. For small molecules, the cross peaks resulting from slowly exchanging rotamers are of the same sign as the diagonal peaks. The NOE cross peaks, on the other hand, are of opposite sign compared to the diagonal peaks. When both types of correlations are present there may be more NOE correlations than expected. What follows is an example of this. The figure below shows a color coded chemical structure of a ruthenium complex with a color coded partial 1H NMR spectrum. 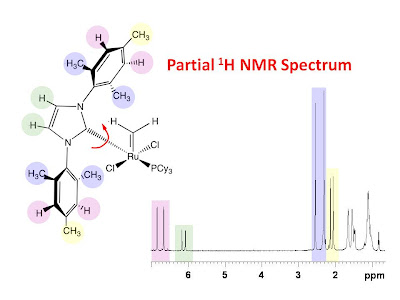 It is obvious from the NMR spectrum that all of the signals from the color coded protons are doubled in the spectrum. One possible explanation for this is that there is a slow rotation about the ruthenium carbon bond indicated with the red curly arrow allowing for two possible nonequivalent rotamers. This is confirmed with the 2D 1H NOESY spectrum shown in the figure below with a 0.9 second mixing time. The spectrum clearly shows exchange peaks between corresponding pairs of 1H signals from each rotamer. 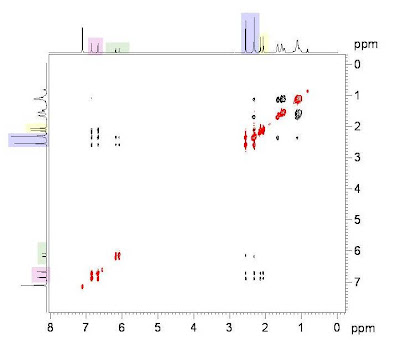 The interesting thing to note from the NOESY spectrum is that each aromatic proton (pink) from a single rotamer shows NOE correlations to the methyl groups (blue and yellow) of both rotamers - not just those from a single rotamer. With this data, it is not possible to assign the subspectrum of a single rotamer. Presumably, the assignment could be made by collecting a 2D NOESY spectrum at low temperature where the rotation was completely frozen out or by collecting a 2D NOESY spectrum with a very short mixing time where the rotation would be limited. The problem with the former approach is that the solvent may freeze at a temperature too high to stop the bond rotation. The problem with the latter approach is that the NOE's would be much reduced due to the short mixing time and collecting a 2D data set with sufficient signal to noise ratio would take a great deal of time. Another approach is to collect selective 1D gradient NOESY spectra with selective excitation of the aromatic proton from each rotamer individually. These data are shown in the figure below for two different mixing times. 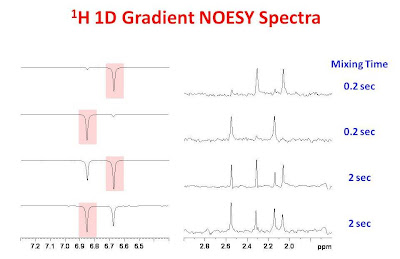 Each spectrum is displayed in two parts. The left-hand panel is the aromatic region with the selectively excited resonance colored red and the right-hand panel is the aliphatic region showing the NOE correlations to the methyl groups. From the spectra collected with a 2 second mixing time, one can see that the selective excitation is no longer selective due to bond rotation during the long mixing time. One can see inverted peaks for the aromatic protons of both rotamers despite the fact that the 1H signal of only one rotamer was selectively excited. Furthermore, NOEs to the methyl signals from both rotamers are present. The spectra collected with only a 0.2 second mixing time, on the other hand, show very selective excitation. The time scale of the bond rotation is obviously longer than the 0.2 second mixing time. The spectra show only the NOEs between the selectively excited aromatic proton and the methyl groups from a single rotamer. The NOEs build up fast enough to be observed during the 0.2 second mixing time before rotation occurs. These data allow for the assignment of signals from each of the rotamers.

Thank you to Justin Lummiss of Dr. Fogg's research group for sharing this interesting system.
Posted by Glenn Facey at 11:42 AM 2 comments: