2D NOESY (Nuclear Overhauser Effect SpectroscopY) experiments are used extensively to study the conformation of molecules both small and large. In such experiments correlations exist between protons that are close to one another in space. The intensity of the correlations also depends on the molecular weight of the compound being studied. Fast moving (small) molecules have positive NOE's for protons in close proximity, whereas slow moving (large) molecules have negative NOE's. For molecules of an intermediate mass (1000 g/mol - 1500 g/mol), the NOE's are very close to zero at commonly used magnetic field strengths. The figure below illustrates that in the NOESY experiment, small molecules will exhibit cross peaks of opposite sign to the diagonal (positive NOE's) while large molecules will exhibit cross peaks of the same sign as the diagonal (negative NOE's). 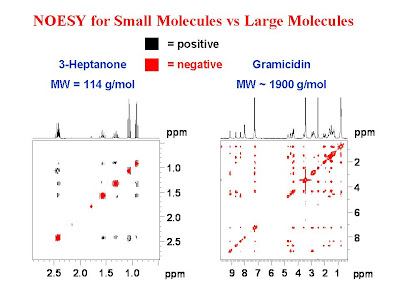 Thanks this is helpful!

So If I had a metal complex with M.W ~ 550, would I see both positive and negative NOE's for protons that are close in proximity? Because this is what I am observing.

Molecules with short correlation times for rotational diffusion (such that the product of the correlation time and the angular Larmor frequency is much less than 1), will yeild NOESY spectra with cross peaks antiphase with respect to the diagonals. Your metal complex must fall within this regime.