Many students are still running the old freeware version of MestReC (version 2.3) to process their NMR data. This version of MestReC has a problem importing data collected on Bruker NMR spectrometers with digital receivers (DRU). When the FID is imported and Fourier transformed in MestReC 2.3, the spectrum has an enormous first order phase error as seen, for example, in the left hand panel of the figure below. A huge first order phase correction can be applied within MestReC 2.3 to get a phased spectrum. This is not a problem in later versions of the software. 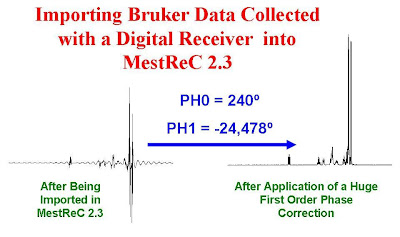 Glenn, I don't have MestReC here but I wonder if this could be solved by converting the digital data to analogue first? Have the students issue the convdta command from TopSpin first and then import into MestReC. Should be interesting...

Good point. Indeed, if you convert the data to analog vis Bruker's "convdta" command and then import into MestReC 2.3, no huge first order phase correction is necessary.

Sometimes it is more easy to shift the FID in a cyclic way putting a 'weird' initial part at the end and then Fourier transform it. Actually, it is equivalent to 1st order phase correction. I don't know whether the old MestRec provides this functionality.

convdta works, thanks so much Glenn!