Dipolar Dephasing as an Assignment Tool

The dipolar dephasing sequence is routinely used in 13C CPMAS NMR as described previously. The lower trace of the figure below is the 13C CPMAS spectrum of Dianin's compound which forms an inclusion compound with ethanol. The upper trace shows the 13C CPMAS spectrum with a 40 microsecond dephasing delay. All rigid CH and CH2 carbon signals disappear leaving the quaternary carbons. The methyl signals and the CH2 signal for ethanol survive the delay as the carbon - proton dipolar coupling is very much reduced due to methyl group rotation and molecular motion of the ethanol, respectively. 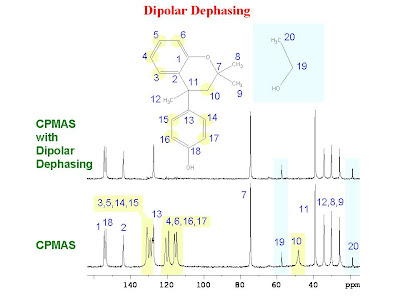