The stereochemistry of compounds is assigned very often with proton - proton NOE's by applying the 2D NOESY technique or the 1D selective gradient NOESY technique.  These methods fail, however when the distance between protons is too large to measure an NOE.  When faced with this situation, it may be possible to measure long range proton - carbon coupling constants which are able to provide the necessary information.  Three-bond carbon - proton couplings follow a Karplus relationship where the magnitude of the coupling constant is related to the dihedral angle between the carbon and the proton.  In some cases, these dihedral angles may be used to assign the stereochemistry.  Coupling constants are largest for dihedral angles of 0° and 180° and smallest for dihedral angles of 90°. The simplest way to measure the long range coupling constants is to collect a 13C NMR spectrum without 1H decoupling.  These spectra can be very complicated as can be seen from the figure below showing the C2 and C3 aromatic carbons of toluene. 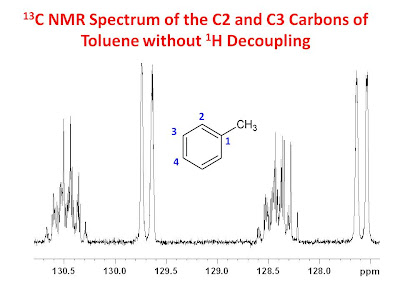 Extracting specific long range carbon - proton coupling constants is quite tedious.  One way to simplify matters and obtain specific carbon - proton coupling constants is to apply the selective 2D heteronuclear J-resolved technique first introduced by Bax and Freeman in 1982 (JACS 104, 1099).  This method employs a 13C spin echo with a selective 1H 180° pulse applied simultaneously with the 13C nonselective 180° pulse. A version of this sequence is shown in the figure below with a shaped adiabatic 13C 180° pulse. 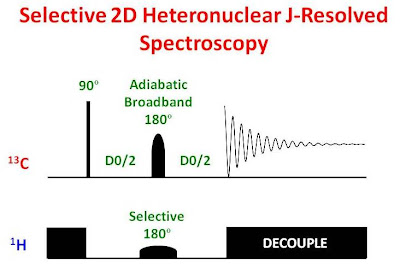 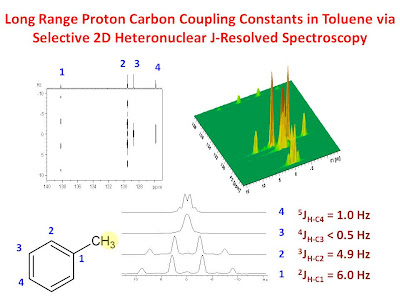 All of the carbons coupled to the methyl protons are split into quartets in the F1 domain and the long range coupling constants which were very difficult to obtain from the coupled 13C spectrum can simply be read directly from the 2D spectrum.
Posted by Glenn Facey at 2:46 PM 16 comments: