The quality of the tuning and matching of an NMR probe on a Bruker NMR spectrometer can be monitored by using the wobble (or "wobb") routine in the TOPSPIN software.  This routine sweeps the frequency using low power and displays a plot corresponding roughly to the absorbance vs frequency for the probe electronics.  If the probe has very high sensitivity (eg: a cryoprobe) and contains a sample rich in protons (eg: water) then one is able to observe the proton spectrum in the frequency swept wobble curve.  This is demonstrated in the figure below which shows wobble curves for a 600 MHz cryoprobe containing a sample of water. 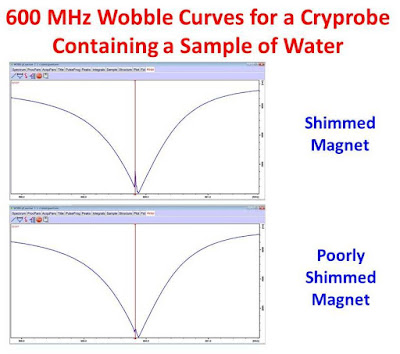 The curves show the tuning profile of the probe with an anomaly at the proton frequency.  The anomaly is the proton signal of the water in the NMR probe. The top panel is the wobble curve for the probe in a well-shimmed magnet and the bottom panel is the same curve after the magnet shims had been grossly maladjusted.  One can see that the anomaly is much more broad in the wobble curve collected on a poorly shimmed magnet as one would expect the signal from the water to be much broader in an inhomogeneous magnetic field.

Thank you to Stan Woodman of Bruker Canada for pointing this phenomenon out to me.
Posted by Glenn Facey at 10:00 AM 4 comments: