Collecting 2D or 3D NMR data can be very time consuming. The indirect dimension of a 2D experiment is sampled linearly via the t1 increments in the pulse sequence.  An FID must be collected for every single linearly spaced t1 increment. In the interest in collecting 2D or 3D NMR data in a more time efficient manner, a great deal of effort is made towards faster data collection techniques.  While some of these methods are based on spatial selectivity, others are based on sparse sampling techniques in the indirect dimensions of nD NMR sequences.  One such sparse sampling method, given the name non-uniform sampling (NUS), samples a sub-set of the indirect dimension in a random (or weighted random) manner and then predicts the uncollected data based on the data sampled, in much the same way data are predicted in the forward and backward linear prediction methods.  The reconstructed data is then used for the indirect Fourier transforms.  A comparison of the conventional and non-uniform data sampling methods is illustrated in the figure below. 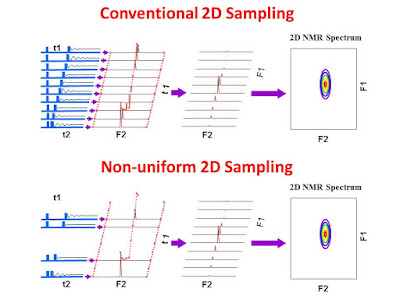 Collecting only a fraction of FID's reduces the experiment time by the same fraction.  The figure below shows a superposition of partial 600MHz 1H-13C HSQC spectra of a D2O solution of sucrose. 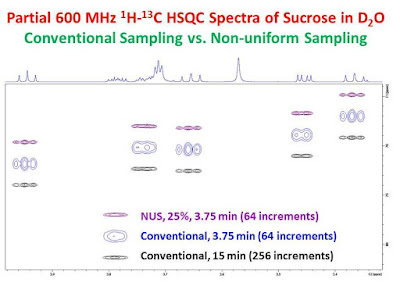