Bruker NMR spectrometers equipped with a 2H TX board and 2H amplifier can be setup to carry out 2H observation and decoupling experiments while still maintaining a 2H lock. Two channel systems can use the 2H transmitter for 2H, 1H[2H], 2H[1H] and X[2H] measurements. In addition to these, a three channel system can be set up for X[2H, 1H] measurements. The first figure below shows the 13C and 13C[2H] spectra collected for a mixture of deuterated solvents using two channels of an AVANCE spectrometer. The second figure shows the 13C, 13C[1H], 13C[2H] and 13C[1H, 2H] spectra for the standard 13C sensitivity sample (40% para-dioxane and 60% deuterobenzene) collected on a three channel Bruker AVANCE spectrometer. 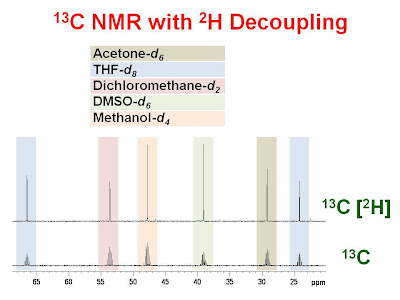 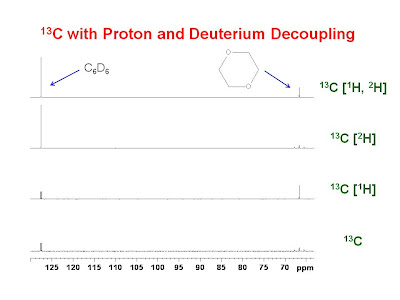 There are many different NMR techniques used to probe molecular structure. Two very useful methods are the HSQC (or HMQC) sequence used to obtain heteronuclear coupling correlations and the TOCSY sequence used to look at extended homonuclear coupling correlations. These are among the most widely used pulse sequences by chemists to help elucidate the molecular structure of organic molecules. The sequences can also be combined into a single HSQC-TOCSY sequence which is simply an HSQC followed by a TOCSY spin lock. For the case of 1H and 13C in organic molecules, the HSQC-TOCSY spectrum provides 1H TOCSY subspectra of the isolated spin systems in the rows at each of the 13C frequencies. Overlap of 1H resonances which may have appeared in a simple 1H TOCSY spectrum can be resolved in the HSQC-TOCSY spectrum provided there is enough shift dispersion in the 13C spectrum. An example of this is shown in the figure below. The top panel shows the HSQC-TOCSY spectrum for 3-heptanone collected on a 300 MHz instrument. One can see the two spin systems on either side of the carbonyl group, color coded in yellow and pink. The second panel shows an expansion of the region within the red square of the first panel. Here we can separate the overlapping quartet and triplet for the methylene protons on either side of the carbonyl group. 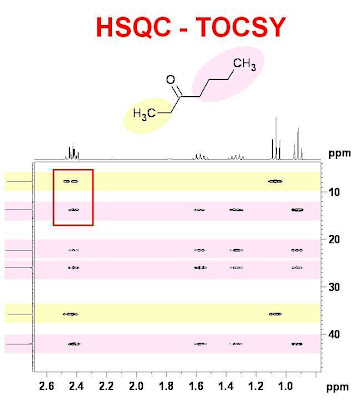 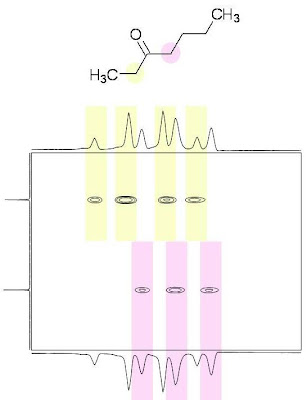