Temperature Calibration in an NMR Probe 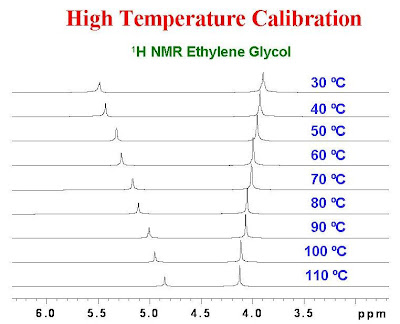 Methanol shows similar behavior and is commonly used to calibrate temperatures below room temperature.
Posted by Glenn Facey at 2:42 PM

I am not certain, but I would guess that it in weight %.

In various sites I found that samples of methanol that are used for VT-NMR calibration should be 100% methanol. On the other hand, in A.L. Geet's article from 1970 he writes that moisture does not cause variations, and that 0.03%v conc HCl should be added. So can non anhydrous methanol be used?

I don't think it matters whether the methanol is dry or has a bit of water - as long as the difference between signals is temperature sensitive AND the calibration plot corresponds to a similar sample.