Many NMR magnets use a one-way valve on the helium exhaust to permit the helium gas to vent but not allow air to be sucked into the cryostat. Some of these valves have a mechanical oscillation when helium gas is vented. This oscillation can be seen as an artifact in NMR spectra and is more of a problem immediately after a liquid helium fill. This is illustrated in the figure below for the 500 MHz 1H NMR spectrum of the singlet in ethyl acetate. All three spectra were acquired non-spinning with 1 scan. 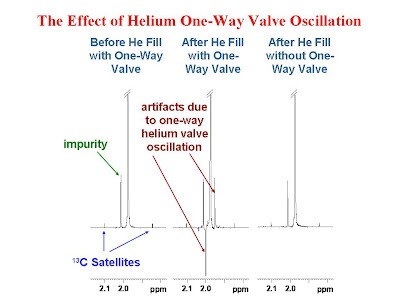 Was the one way helium valve faulty? Or did you find a work-around?
Thank you

I don't think the one-way valve is defective as I have seen it with others as well. I think that the higher boil-off immediately after a helium fill is sufficient to make the valve vibrate. As a work-around, I just connect a long latex hose to the open helium vent for a day or two after the fill after which I replace the one-way valve.

Bruker is trying to sell me a one-way valve that can stay on during a fill (pn z58140)is it worth the extra cost or am I going to see the same artifacts?

I do not know the answer.

About the Bruker valve (Z58140) I think are great for helium filling and I can't give any downside (I've have them on 3/4/5/6/ and 700 magnets at VT and FDA). I don't know about artifacts, all I can say is I haven't notice them (we do wait some time before running anything, but haven't done any careful comparison).