In talking to many novice NMR users over the years, I have often been discouraged to learn that some do not even realize that they are using heteronuclear broadband decoupling when they run (for example) a 13C spectrum. They do not question why their signals are singlets or even realize why they may not be singlets if 1H decoupling is not used. It is for this reason I have added this BLOG post. Heteronuclear broadband decoupling is the irradiation of one nuclide while observing another nuclide. It is normally applied using multiple pulse decoupling schemes such as WALTZ 16 or GARP. These schemes effectively allow the decoupling to be efficient over a range of frequencies (sometimes even the entire chemical shift range!) with a minimum of power. The figure below shows some common modes of heteronuclear decoupling. 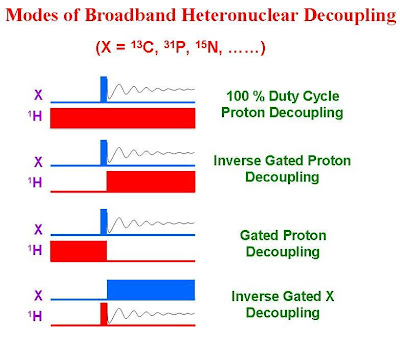 In the top trace, broadband 1H decoupling is applied with a 100% duty cycle. This is most common for the collection of 13C NMR data. It is applied during the acquisition time to decouple protons and during the recycle delay to take advantage of any nuclear Overhauser enhancement. In the second trace, decoupling is applied only during the acquisition time to decouple protons but not during the recycle delay. This is called inverse gated decoupling and is often used when collecting NMR data for nuclei like 15N or 29Si which have negative gyromagnetic ratios and hence negative nuclear Overhauser effects. In the third trace the decoupling is applied only during the recycle delay but not during the acquisition time. This is called gated decoupling and is used when a fully coupled spectrum is desired while still taking advantage of any nuclear Overhauser enhancement. The bottom trace shows an example of inverse gated decoupling applied to an X nucleus while observing protons. For examples of this, click here and here.
Posted by Glenn Facey at 11:04 AM

What is the correct usage of 'nuclide' vs 'nucleus'?

According to the very authoratitive Wikipedia:

"A nuclide (from lat.: nucleus) is a nuclear species which is characterized by the number of protons and neutrons that every atomic nucleus of this species contains. It can be used to distinguish isotopes among nuclei...."

I chose to use the word "nuclide" rather than "nucleus" here as it can be used to distinguish between different isotopes of the same element. For example, one often decouples 1H from 2H. I think the word "nucleus" would work OK here too but I think "nuclide" or perhaps "isotope" are more effective.

One question: when acquiring 13C spectra with inverse gated decoupling you are decoupling during acquisition and the NOE will be building up during this time. How much of a delay is required with the decoupler off to allow the NOE to dissipate? Is it related to the T2 of the protons?

Hi Gelenn, can you briefly explain all the instrumental requirements to perform a NMR for nuclei others than 1H and 13C (N, F, P ,Si)? thanks a lot.

PD: congrats for your blog

Dear Glenn,
I wanted to ask you which mode is suitable for quantitative analysis, can you please explain it.

Isha,
To get a quantitative spectrum for 13C, 31P, 29Si, 15N etc... with 1H decoupling, one would set the recycle delay very long with respect to both T1 and the acquisition time and use inverse gated decoupling. See this link: