When one acquires NMR data with extremely short dwell times (or very large spectral widths), problems are often encountered with severe baseline roll as the first few points in the FID are lost either to the receiver dead time or probe ringing. The satellite transition MAS spectra of quadrupolar nuclei are characterized by many sharp spinning sidebands and require the use of very large spectral widths to accommodate the entire sideband envelope. The FIDs for such samples contain rotational echoes at the period of the rotor. Due to the extremely short dwell times required to collect such data, baseline problems are very common. In such cases simply removing the initial few bad points or using backward linear prediction will not solve the problem satisfactorily due to the nature of the FID. There is however a very simple solution. One can simply remove all of the points in the FID before the first rotational echo and then carry out the Fourier transform. The figure below shows the FID's and spectra for the 27Al MAS NMR of kaolinite. The spectra show the satellite transitions. The resonance for the central transition is off scale in the figure. In the left hand side of the figure the raw FID was Fourier transformed and phase corrected. One can see extreme baseline roll. In the right hand side of the figure, all of the points prior to the center of the first rotational echo in the FID were discarded and the new FID was Fourier transformed and phase corrected. The baseline is much improved. 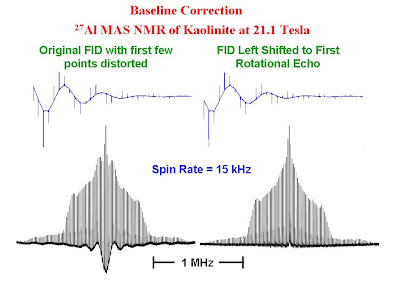 Do you now if is possible shift the FID in TopSpin? (easily or it is necessary extract the points? and then process them manually?)

if not how do you sorted out with the spectra on this post?

and THANKS SO MUCH to have this fantastic blog!

Thank you for the question. Yes, it is possible to left shift the points of the FID using TOPSPIN. Do the following.

1. Type "convdta" to convert the FID from digital to analog. This is not necessary if your data were collected in analog mode. You will be prompted to enter a new experiment number to store the new analog formatted FID.

I already tried and it works perfectly 😃