Many students who do liquid state NMR or solid state NMR of spin I=1/2 nuclei have very little appreciation for the information content and complexity of the solid state NMR spectra of spin I = n/2 quadrupolar nuclei (n= 3, 5, 7....). In part, I think this may be due to the mathematics involved with explaining the important effects. With this post, I attempt to describe the NMR spectrum of an I = 5/2 nucleus in the soild state without resorting to mathematics. I hope that this post helps to boost the understanding and appreciation for the NMR spectra of these important nuclei.

When one collects the NMR spectrum a spin I = n/2 nucleus in solution, one normally observes a single NMR resonance line for each species as the (n+1) Zeeman energy levels are equally spaced and the nucleus is undergoing fast isotropic motion. The width of the resonance depends upon the efficiency of the relaxation (usually dominated by the quadrupolar interaction). The more efficient the relaxation, the broader the resonance. In many cases, the width of the resonance may be comparable to the complete chemical shift range for the nucleus and in some cases it may be so broad as to make its observation impractical or impossible. For these reasons I = n/2 quadrupolar nuclei generate less than their share of interest in liquid state NMR compared to spin I = 1/2 nuclei like 1H, 13C, 31P ..... etc. 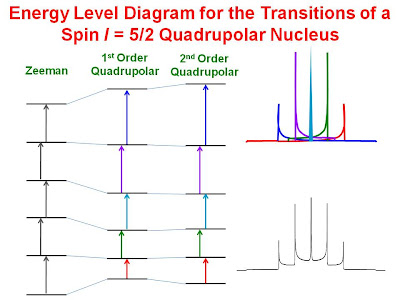 The energy levels are no longer equally spaced. Furthermore, the position of the resonances resulting from the transitions depends on the orientation of the nucleus with respect to the magnetic field. Since all orientations are represented equally in a powder sample, each transition gives a powder spectrum. This is illustrated on the right-hand side of the figure. Note that the m = 1/2 and m = -1/2 energy levels are affected equally to first order and that the central (m = 1/2 - m = -1/2) transition is affected only by the second order perturbation. As a result the line width of the resonance from the central transition is much narrower than the other transitions. (In the figure, the central transition is clipped significantly.). Unlike the first order interaction, the second order interaction is field dependent. The width of the central transition depends inversely on the strength of the magnetic field.

Magic angle spinning is a technique used by solid state NMR spectroscopists to obtain high resolution NMR spectra of solids. Magic angle spinning at infinite speed completely averages the first order quadrupolar interaction but only partially averages out the second order interaction. The energy level diagram for a spin I = 5/2 nucleus spinning infinately fast at the magic angle is shown in the figure below along with a simulated spectrum. 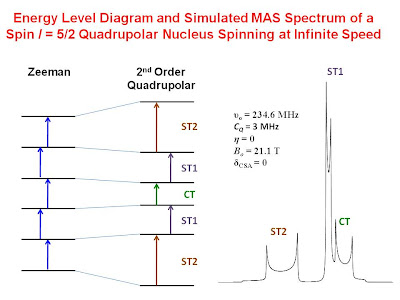 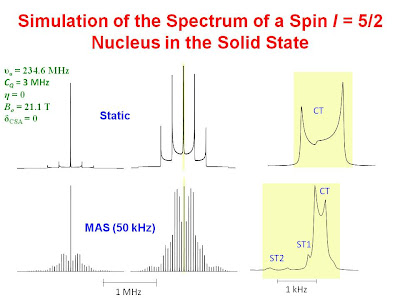 Hi Glenn.
Nice article, as always. I have kind of commented on it on my own blog, though my note does not really regard/affect your theme (see this link).
I just wonder whether there is some reason I am missing why the n in I = n/2 should be odd. I think that I = 3 = 6/2 (Boron-10) would present the same spectral features (though, admittedly, n = 2 would lead to a simpler pattern). Am I wrong? Since you are doing lots of solid state (I don't), maybe you could comment on this and I will just link to it.
Stan

Thank you for your comment. I think you are correct to say that a distinction between n being even or n being odd need not be made. I suppose the reason why many solids NMR people speak of I=n/2 spins with n=3,5,7... is that often just the central m=1/2 - m=-1/2 transition is easily (or not so easily) observable and spins like 10B with I=3 do not have a similar central transition.

Sorry Stan for the typo in your name.

No problem (now just an "a" separates me from what I really am :-)

I will try and look through some MAS data catalogs to see whether I can pick out some spectra of those even n boson nuclides. My feeling is that since we talk about just 5 nuclides (plus the 3 with spin 1, but those are a different story) nobody really cares much and the term "half-integer spin nuclei" is more fancy than a mere "high spin nuclei" ... you see what I mean. But I am still afraid that I might be mistaken. Your explanation sounds good but does not quite convince me since, after all, the integrals must come out right.

A different question (just a curiosity): which software did you use to simulate the spectra? And, for the fun of it, could you simulate 10B?

You are certainly not Satan!!

I used Simpson to do the simulations and yes perhaps I will try 10B and put it in a future post. It seems to me that all of the transitions in a spin I=3 nucleus will be affected by the first order quadrupolar interaction and be very broad in the solid state spectrum. The central transitions of I=n/2 (n=3,5,7,..)nuclei are not affected by the first order interaction and are therefore broadened only by the second order interaction making them easier to observe. This accounts for the "special" place for spin I=n/2 nuclei (n=3,5,7..) in the hearts of solid state NMR spectroscopists.

I'd also like to point out that the term "half-integer quadrupolar nuclei" is used in Melinda Duer's excellent textbook "Solid-State NMR Spectroscopy".

Yesterday it was slowly dawning on me that the +1/2 <=> -1/2 transition was indeed different. Since you mentioned Melinda Duer, I emailed her and this is what she wrote back:

Hi Stan,
Glenn is right about why people talk of "half integer spins". Basically, if you have a significant quadrupolar broadening and n is even you will probably see nothing in your spectrum as all the transitions are broadened to first order, i.e. massively. But for n odd, the central transition, i.e. +1/2 to -1/2 or vice versa is not affected to first order, only second order, so you will usually be able to observe that one (albeit as a powder pattern under MAS). 10-B is an interesting case as quadrupole couplings for boron are usually fairly small so you will be able to record a spectrum of the first order broadened lines.
Hope this helps, Melinda.

Well, it does, the matter is now settled. I should have done more homework and worked out the Hamiltonians. Since I have learned something, I will refrain from raising the question whether Vanadium-50 might perhaps also give a detectable signal ... sometimes ... a broad and weak one ... It would be beyond the point :-)

You solid-state guys should reciprocate by refraining from implying that nuclei might be half-integer: it arouses me from my ground state of torpor ...

Thank you so much for this article!! I am a chemist using SS-NMR as a tool so I am not too familiar with the theory and I was really struggling to get only a little bit familiar with 27Al NMR before I read this. Especially the figures are awesome.

Currently, I am interested in determining the relative amount of different Aluminum sites in a zeolithe. I will identify my sites with a 2D MQMAS experiment but to quantify them there is the need for a quantitative 1D spectra. And that is the point. They won't be quantitative as long as the sites have different quadrupolar coupling constants and hence intensity is lost into the spinning sidebands of the satellite transitions to a different extent.

I heard that there is a method by exciting only the central transition to reduce the satellite transition intensity to a minimum (a simple single-pulse experiment). Basically, the excitation pulse has to be shorter than 15°. Do you know something about that or am I totally wrong? Maybe I misunderstood and the short pulse is needed to excite all central transitions (despite their differen quadrupolar coupling values) equally.
You see, I am confused :(

Thank you for your comment. There is one other situation that I can think of where a 90X-tau-90y-tau echo will work – that is for the case of a pair of homonuclear spin I=1/2 nuclei dipolar coupled together. In this case the energy level diagram is similar to that of a single spin I=1 nucleus and the spectrum is a Pake doublet. See this post http://u-of-o-nmr-facility.blogspot.com/2008/10/proton-spin-pairs.html .

The main problem with quadrupole nuclei is the size of the electric field gradient(efg). This combined with the quadrupole moment(Q) determines how broad the lines will be.
Another difference between integer and half integer nuclei is that for half-integer the ±m levels are degenerate in zero field whereas for integer spin (except for a axially symmetric efg) the ±m levels are already split in zero field. The application of even a small magnetic field will perturb the half integer nuclei, but have little effect on integer spins.