It is very important that an NMR spectrometer operate within a fixed temperature range. To control the temperature, many units within the console are equipped with cooling fans which must be kept in good working order. Failure to do so will shorten the life of the spectrometer and cause instability or malfunctions. In the Bruker AVANCE series of spectrometers, the SGU (Signal Generation Unit) boards are particularly sensitive to temperature. Each SGU houses a DDS (Direct Digital Synthesizer) containing numerically controlled oscillators which regulate rf frequencies and amplitudes. The DDS is normally temperature regulated at 55° C to insure stability. Both the SGU board temperature and DDS temperature can be measured either with the "UniTool" (AVANCE and AVANCE II) or web based tools (AVANCE III).

Although this may not be recommended by Bruker, I now run our AVANCE spectrometers with the back panels removed. 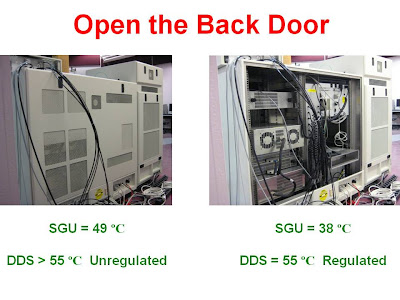 Are there any empty slots in your AQS rack that are open? Meaning that there is an open gap in the AQS rack that is not covered by the panel slots thst fit into the gaps. Sometimes these open gaps can cause these types of heat problems because the cooling air is escaping through these open slots instead of being routed through the AQS appropriately. If there are these open slots you may want to get the covers for them and see if that makes any difference.

we always keep the back panels removed. So don't be afraid Bruker doesn't recommend it ;)
Moreover, the fans tend to die after a few months due to the constant operation of a spectrometer. So you better keep an eye on them ;)

On previous generations of instruments (Bruker already, some 30 years ago), my dad used to take the electronic components out of the frame and align them on a separate open shelf, with a fan blowing on them. It was a weird looking setup, but it worked.

How do you clean the air filters, it cost hundred of dollars to buy them from Bruker.

I use a vacuum cleaner. I do believe however that replacing the filters would be a better option.

I'm not sure how to monitor the temperature in an older PTS synthesizer or indeed if it is important to do so.