I have used is a very simple alternative method for calibrating the temperature of the sample compared to that of the variable temperature unit. This is illustrated in the figure below. 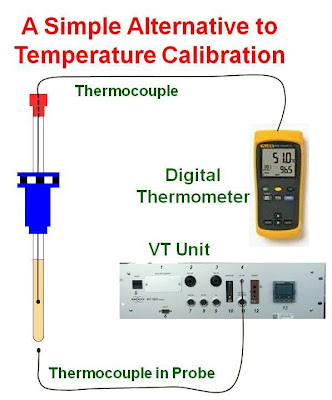 A "sample" is prepared by pushing a NONMAGNETIC thermocouple through an NMR tube cap. The depth of the thermocouple is adjusted such that when the cap is put on the NMR tube, the tip of the thermocouple sits in the center of the rf coil. The NMR tube should contain a suitable liquid filled to the correct depth. The tube is placed in the spinner and set to the proper depth with a depth gauge. While holding onto the thermocouple, the sample is lowered into the magnet until it sits correctly in the NMR probe. The thermocouple is connected to a digital thermometer (some of these devices can use a second thermocouple in an ice water bath as a reference). The desired temperature is set on the variable temperature unit. When the temperature on both the variable temperature unit and digital thermometer have stabilized (~ 10 minutes), the values from each are recorded. This is repeated for temperatures over the desired temperature range and a calibration plot is constructed. Shimming is not an issue. Note that no NMR measurements are made and that the sample tube is not spinning.
Posted by Glenn Facey at 1:58 PM

I wonder, what thermocuple did you use? I guess, it can't be just regular and available K-type thermocouple, but something more complex?

Hi Glenn,
can we use the same method for calibarting temperature in Solid VT Satatic Probes?

Thank you for your comment. I have used a similar method for solids wideline probes where the top of the coil is visible through the top of the probe. My wideline probes have Teflon inserts containing the rf coil with a female ball joint on the top. For this case I insert a glass tube with a male ball joint on top of the probe such that it extends out of the top of the magnet. To measure the temperature, I put the thermocouple down the glass tube such that it touches the horizontal solenoid coil. After the temperature is measured, I lift the thermocouple up several inches while collecting the NMR data so that it is out of the way.