What are Those Positive Peaks in My NOESY Spectrum?

Students will sometimes ask me, "What are those positive off-diagonal peaks in my NOESY spectrum?". Since the NOESY pulse sequence is exactly the same as the EXSY sequence, a NOESY spectrum will show all possible correlations due to cross relaxation. These correlations include those from NOE's, chemical exchange and conformational (or rotational) exchange. For small molecules, if one phases the diagonal responses such that they are positive, the NOE's correlations will be negative and the exchange correlations will be positive. The answer to the question is therefore that the positive peaks are due to exchange. The figure below shows an example where three different types of cross peaks are visible. The molecule in the figure has two distinct rotational conformations in slow exchange with one another and gives a proton spectrum with every resonance doubled. Each resonance for one rotational conformation gives a positive (black) cross peak correlating it to the corresponding resonance of the other conformation. There is also a positive cross peak correlating the -NH- proton in the molecule to the residual water in the DMSO-d6 solvent. These protons exchange chemically with one another. Finally, the negative (red) correlations in the figure are due to NOE's. 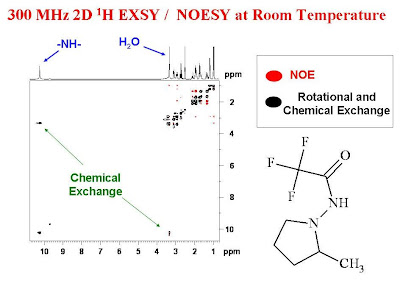 Thank you to Jean-Gregoire Roveda of Dr. Beauchemin's group for giving me permission to use his spectrum as an example.
Posted by Glenn Facey at 3:17 PM