The combination of cross polarization with dipolar dephasing is very useful as an assignment tool in 13C CPMAS spectra. The technique works well with dephasing delays of 40 to 60 microseconds when low MAS spinning speeds ( 2 - 5 kHz) are employed, as these speeds are insufficient to effectively average the heteronuclear dipolar coupling interaction. At higher fields, faster MAS rates are often needed to avoid an undue number of spinning sidebands. At faster spinning speeds the heteronuclear dipolar coupling interaction is more effectively averaged and much longer dephasing delays (hundreds of microseconds) must be used. The use of such long delays makes phasing the NMR spectrum impossible. In these cases a 180 degree 13C pulse can be applied at the midpoint of the dephasing delay to refocus the 13C chemical shifts and permit proper phase correction. This scheme is shown below. 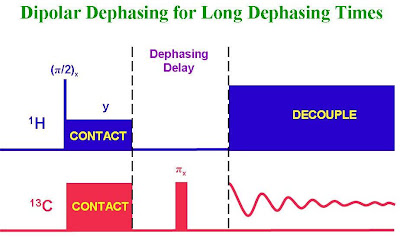 Glenn, this is interesting. You mention that this refocussing version of the experiment is often done at higher fields. I wondered when reading this if the notoriously poor bandwidth coverage of such a pi pulse, especially at higher fields, would create problems with offset effects? Is the pi pulse typically square or a composite?

I simply use a square 180 degree pulse at high power (typically 7 usec for 180 degrees). Yes, there are offset effects with using such a pi pulse which are especially a problem at high field. I tend use this experiment over a narrow bandwith (typically the aromatic region of a 13C spectrum). Your suggestion of using a composite pulse is a good one. Although I have not tried it, I believe it would provide better results over a larger band width.