17O is a spin I = 5/2 quadrupolar nucleus with a natural abundance of only 0.037%. Its receptivity with respect to 13C is 0.061. Unlike the complications of the NMR spectra of quadrupolar nuclei in the solid state, the spectra in solution are quite simple as all of the energy levels are equally spaced by the Zeeman interaction, the first and second order quadrupolar effects averaged by the rapid isotropic motion in solution. 17O has a chemical shift range of more than 1600 ppm, making it quite sensitive to the local chemical environment of the oxygen and therefore potentially useful to the chemist. The figure below is a 17O NMR spectrum of a mixture of water, acetone, ethanol, isopropyl alcohol and ethyl acetate acquired in less than 15 minutes on a 300 MHz NMR spectrometer using a standard broadband probe with a 5 mm NMR tube. One can see that every single oxygen site is resolved in the spectrum. 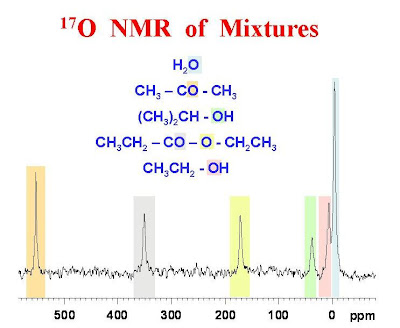 In order to overcome the problem of low sensitivity, one should use as much sample as possible either as a neat liquid (if the sample is a liquid) or in a very concentrated solution with a solvent free of oxygen (if the sample is a solid) - the more sample the better. There may also be problems if the quadrupolar dominated relaxation rate is too fast resulting in resonances that are very broad.
Posted by Glenn Facey at 1:15 PM

Glenn, although of course I believe you, I am surprised this only took 15 minutes. Perhaps you can comment on how many transients you were able to squeeze into 15 minutes (how short was D1)? Also, do you have a 10 mm probe for your 300 or is this 5 mm?

Here are the specifics:

always like reading your items; particularly, those about nuclei other than 13C and 1H. Agreeing with Mike, 15 minutes sounds really short, and makes me wonder why this was not commonly done at my former group in Nijmegen. We commonly used IR to identify the presence of esther functionalities, as opposed to free acid. What are the 17O shifts for free acids? That is, would 17O NMR be suitable for identification of free acid versus esters?

Oh, now I forgot to mention that a added the five spectra to the NMRShiftDB.org. The submissions still require approval by a reviewer, but should become public soon.

BTW, I had to guess the exact shift values by eye... might you include numerical shift values in addition to spectra next time? I would much appreciate that!

I am certainly no expert in 17O NMR so I really can't provide the answer to you question regarding whether or not 17O NMR can be used to distinguish free acids from esters. My "feeling" is that it may be useful for this, but I would have to do some reading or a few experiments to find out. Keep in mind that you need alot of sample and there is the possibility that the lines will be broad. The spectrum I ran was a hastily made mixture of the solvents listed in the BLOG post. I assigned the spectrum by running each on its own.

Be careful with the shifts, I ran this spectrum unlocked without shimming the magnet. Initially I ran the spectra of D2O and H2O. I referenced to H2O at 0 ppm and then ran each compound on its own and then the mixture. I did notice that the lines shifted a bit from the spectrum of the neat compound compared to that of the mixture.

I was wondering, are there specific Oxygen 17 sequences or did you adapt a zgpg for example? If there are, what is the keyword by which I can find them in the Bruker library?

I just used a standard one-pulse zg sequence without any decoupling. Here are the details:

You could try the "aring" sequences from Bruker to help minimize acoustic ringing. See this post:

Hi Glenn, it's anonymous again,
Out of curiosity, what was your p1 ?

Anonymous,
I cannot recall the duration of the pulse. I measured the 17O 90 degree pulse on a sample of D2O. I suspect it was between 15 and 30 microseconds at -6dB using a 300 W amplifier.
Glenn

I want to measure 17O on our Bruker 400MHz NMR instrument but don't have experience.

Could you please suggest some parameters for setting-up 17O measurement?

Yuji,
Start with a sample of D2O. Use the zg sequence. Calibrate the 90 deg pulse using high power.
the acquisition time should be about 0.04 sec. The recycle delay should be about 100 msec. You may have to increase the dead time (de) to a few tens of microseconds to accommodate probe ringing. Use about 50 Hz of exponential line broadening. Your samples should be neat liquids run unlocked or VERY concentrated samples in solvents free of oxygen.

I tried to run 17O NMR, but the instrument said

Cannot perform getprosol
The following informations are not found:
Observe Pulses for 17O

Any suggestions for this?
Thanks!

Yuji,
This just means that the 17O pulses have not been calibrated and entered into the 'prosol' table. Calibrate the 17O 90 degree pulse and enter the value in the 'prosol' table by usind the "edpeosol" utility. Once this is done "getprosol" will work.
Glenn

Yuji,
Open up your spectral width to 100,000 Hz. The signal may be outside of your window of observation. Once you find the signal, set the transmitter close to the signal and narrow down the spectral width. What is the pulse width, p1 and power, pl1?
Glenn