NMR probes can be tuned and matched on the bench or while in the magnet using a sweep generator and oscilloscope or a specialized tuning box such as the one available through Morris Instruments.  More typically, probe tuning and matching are monitored using the electronics in the NMR console and preamplifier.  In either case, it is important to realize that any filter or cable between the preamplifier and the probe is part of the rf circuit being tuned and should therefore be present while adjusting the tuning and matching capacitors of the probe.  This is illustrated in the figure below.  An NMR probe was tuned and matched using the wobble function of a Bruker AVANCE spectrometer. There was a bandpass filter and a short cable between the preamplifier and the probe.  The tuning curve is shown in the top of the figure.  The 90° pulse was measured at 11.25 μsec. The short cable was then replaced with a long cable and the probe tuning and matching capacitors were left unchanged.  The tuning curve is shown in the bottom of the figure below.  It is clear that the overall circuit is no longer tuned and matched.  The 90° pulse was measured at 13.75 μsec using the long cable. 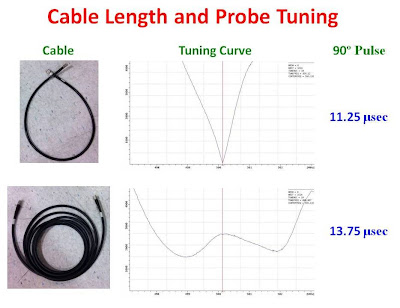 Actually, cable length should not make a difference, if the probe is properly balanced. If just switching the cable detunes the coil, there might be substantial (unwanted) common mode currents an the cable.

Thank you very much for your comments. I am by no means an expert in rf electronics and I really appreciate your input. I agree that in principle the cable length should not affect the probe tuning and matching and it does have only a small effect in the absence of an in-line band pass filter. Furthermore, although small, the effect of cable length on the probe tune and match is different from probe to probe in the absence of a band pass filter. When a band pass filter is between the preamplifier and the probe the effect is much larger and again varies from probe to probe. The data presented in the post are from the 500 MHz proton channel of a triple resonance X/P/H probe using a narrow band pass filter. The effect was considerably smaller (although still significant) when the 500 MHz proton channel of a standard inverse detection probe was tested using the same band pass filter. From these observations, I conclude that the band pass filter, cable and probe rf circuit must interact strongly with one another and that users should be aware of these effects while tuning their probes.

Is there an easy way to correct the the problems you mention in your comment?

I may be totally wrong. I got the impression that the cable length has to be a certain proportion to the wavelength of the RF in order to deliver the power efficiently. Someone got to explain a complex theory in understandable terms. Thanks.

yes, as usual with high frequencies, everything interacts with everything else :). Am I right in guessing that the band pass is used to direct the correct frequency bands to the appropriate channels of the multi resonant probe? What exactly does this band-pass filter look like? Is it a commercially available coaxial filter or some self-made circuit board with LC components? I'm asking because I'm not too familiar with NMR probes; but I'm doing a lot of MRI coil development and the basic principles and problems are the same.

What's most probably happening is this: An NMR probe is working in differential (balanced) mode, the coaxial cable connecting the coil however is unbalanced. If this interface between balanced and unbalanced components is not done properly, you get common mode currents on your cable. That means there is RF energy propagating along the outside of the cable, which has a lot of negative effects on probe performance as well - some amount of your input power gets radiated, as the cable basically acts as one large antenna. Another side effect is that tuning and matching is extremely sensitive to cable length and positioning. I'm guessing this is happening at the band pass filter.

Typically, one could use a Balun; however at least in MRI coils, common mode chokes are usually employed. There are a lot of different designs, but I really like these floating traps that are quite easily built and you can just slide onto your cable. I've used them up to 300 MHz and they worked quite well. There are lots of other designs, the paper I linked should give you some references. Also, the NMR Probeheads book by Mispelter has a chapter on probe balancing.

So to conclude: You need some way to suppress common mode currents. This will increase your tuning/matching stability and probably also probe performance. If you have any further questions feel free to contact me!

What you're probably thinking about are transmission line impedance transformers. If you have a transmission line (like a coaxial cable) that is exactly 1/2 lambda and connect an NMR probe with some impedance Z to one side, you will see exactly the same impedance at the other end of the cable. This is useful if you need to position some components (e.g. preamp) away from the coil. If the line is exactly 1/4 lambda, you have a quarter-wave impedance transformer that will, for example, transform a short (low impedance) on one side to a high impedance. This is used for example for preamplifier decoupling in NMR phased array coils.

All this is only relevant when the parts you are connecting do not present a 50 Ohm impedance. In that case, the length of the cable does not matter at all.

Thank you for the explanation, references and advice. The bandpass filter I am using is a a commercial LC filter manufactured by DCI. It is used to filter out high or low frequency noise from the amplifier and pass only the desired 500 MHz for the proton channel of the probe.

As far as I understand, the length of the cable is arbitrary provided that the probe is matched to an impedence of 50 Ohms and that the coaxial cable with a 50 Ohm impedence is used.

You are perhaps thinking of quarter wave traps which consist of a length of coaxial cable at odd multiples of a quater wave length. These are used to filter out frequencies other than the one of interest.

with a commercial coaxial filter, this should not happen. If you have a network analyzer available, you might check if the filter really has a 50 ohm impedance or something very close). If not, maybe you get some standing wave effects due to the impedance mismatch and thus a cable length dependence.

Another thing I just remembered is this: To quickly test if you indeed have some common mode currents, touch the cable during the matching procedure. If you get a significantly different tuning/matching depending on where you touch it, you have unwanted cable currents. (Don't do that while firing kWs of power down the RF line, though. Those currents are the sources of patient burns. In a bench/tuning setup with low power however, this works nicely.)

Hi André,
Does the story change if no Balun is used?
For the commercial NMR probes I worked with (solid state magic angle spinning probe), there is no balun. The probe coil is connected directly to the RF input.
What is the advantage to used a balun?

it is possible that the commercial probe has a balun or cable trap included as part of its matching circuitry. Without proper balancing (i.e. without balun or balanced matching), you can get several detrimnental effects, such as field homogeneity distortions or excessive power deposition in an electrically conductive probe, which also translates to reduced SNR. As I wrote above, if your tuning curve changes significantly when you touch and/or move the connecting cable, then you have unwanted cable currents. Does this answer your question?

Hi André,
Yes it does.
Another problem I have seen is: when a balun is used, the part between balun and preamp is very sensitive to surroundings. If I move my finger close to the wires, it dramatically increases the noise.

So I guess the RF configuration looks like this:

How long are the cables between coil and balun and between balun and preamp? Also, if it is a Tx/Rx coil, where is the transmit/receive switch positioned?