The often troublesome stripes of vertical noise in 2D NMR spectra are called t1 noise (i.e. noise originating in the t1 domain). When t1 noise occurs in hereronuclear 2D correlation experiments such as HMBC, HSQC, HMQC or HOESY, there is a simple trick to remove a great deal of the noise and make the data more presentable. The technique was described in a previous post and is demonstrated in this video tutorial using a 19F - 1H HOESY spectrum as an example. 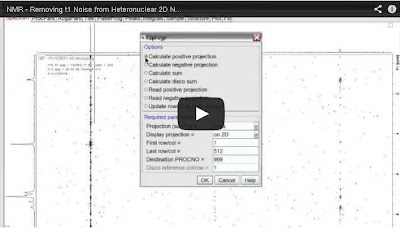 Is it possible to use this method to remove the t1 noise from a phase sensitive (e.g. edited HSQC) spectrum?

Yes, you could use this on a phase sensitive edited HSQC. You may have to subtract both a positive and a negative projection of a noise sample from the data set.

Hi All - First, an apology for such a blatantly commercial post... but I just wanted to say that the "remove t1 noise" functionality in Mnova software works very well and easily. Send me some data if you would like to see some before-and-after.

Isn't this a little bit of cheating? Inappropriate data manipulation?
Wouldn't it be better to find the reason behind the increased t1 noise and correct it? Maybe adjust the lock a bit better or use a gradient version of the experiment?

Thank you for the comment. I wouldn't call it cheating. It should however be clearly stated that it was done. Of course, it is always better to obtain the very best data possible but sometimes it is just not possible to obtain 2D data without t1 noise despite ones best efforts. In these cases, subtracting the noise from the spectrum as done in the video is appropriate as long as one is careful not to include any signals in the noise profile.

Thank you for this tip. Something to note, if you are using to remove t1 noise from HSQC, you need to choose the "retain sign" options when removing the positive and negative projections or else you'll just convert the positive noise to negative noise and vice versa.