EZNMR at the University of Ottawa

The NMR Facility at the University of Ottawa is equipped with eight NMR spectrometers and has on the order of 100 hands-on users at the graduate and post-doctoral level.  Like any university NMR facility, the users enter at varying knowledge and experience levels: from "What does NMR stand for?" to "How do I do a shearing transform for my 5QMAS data set?".  Also, the attitude of the user's supervisors varies considerably.  Some supervisors want their students to spend as little time in the NMR lab as possible by collecting all of their data in automation with a sample changer so they can maximize their time at the bench.   Others want their students to learn how to collect the best possible data and fully understand the NMR measurements they make.  There is no doubt that collecting NMR data under complete automation is incredibly time-efficient however, collecting data in this way teaches the student nothing about NMR measurements.  On the other hand, learning to use NMR spectrometers manually, at the most fundamental level, to collect the best possible data, requires a great deal of knowledge (both general and instrument-specific) and although it is the most educationally rewarding, it certainly provides less overall sample throughput.  In our facility, almost all students are first given 10 minutes of training, on how to collect NMR data under complete automation using our only fully automated instrument.  Running an NMR spectrometer in this way requires absolutely no knowledge of NMR spectroscopy.  Most users are also interested in using the other less automated instruments.  These students are provided with as much training as they desire.   The job of the NMR facility is to educate and satisfy the needs or each user.  Doing so, requires finding a "happy medium" between complete automation and complete manual spectrometer operation and using that medium as a minimum training standard.  For the last ten years or so, the "happy medium" used by the University of Ottawa to run four of it its Bruker NMR instruments is based on a customized button panel approach.  We have written button panels specific to each instrument and call the option EZNMR.  We have included EZNMR as an entry on the top TOPSPIN menu bar.  Clicking the EZNMR option opens up a button panel like the one shown below, used on our AVANCE 500 spectrometer.

Each button either issues a command, runs a macro or runs an "au program".  Some of our students use exclusively this panel to collect their data.  The advantage to using such a system is that the student must at least learn all of the steps involved with collecting the data.  A typical EZNMR session involves simply following the button panel from top to bottom.  If the probe contains a sample, it is ejected with the EJECT button.  A new sample is lowered into the probe with the INSERT button.  The deuterium lock is established by pressing the LOCK button which prompts the user for the solvent and then establishes the lock.   The SHIM button first calls up a standard set of shims and then initiates a gradient shimming routine.  After the magnet is shimmed, the user presses any one of the green buttons depending on which NMR measurement they intend to carry out.  Pressing one of these buttons prompts the user to define a data set and then calls up a reasonable set of parameters into that data set.  If desired, the user can change the number of scans or some of the parameters by pressing the SCANS or PARAMETERS buttons.  The probe is then tuned using the TUNE button.  The START button optimizes the receiver gain and begins collecting the data.  Once started, the data can be processed at any time using the Proc 1D button or halted using the HALT button.  We use a similar button panel for the commonly used 2D NMR experiments which can be called up from the 1D panel.  It is shown here: 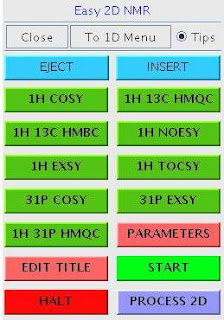 The advantages to using this system are:
-  It is highly customizable for the hardware of each instrument as it is based on macros and "au programs".
-  It can be added to as demands change.
-  All NMR spectrometers using EZNMR look pretty much the same so instrument specific training is less of an issue.
-  Students can begin running NMR experiments very quickly.
-  Students are more likely to ask questions about each step and can learn at their own pace while maintaining high sample throughput.
-  Its use is entirely optional.
-  It is much more time-efficient than complete manual operation.

Students are of course encouraged to learn more about spectrometer operation than is available through the EZNMR buton panels.
Posted by Glenn Facey at 4:16 PM

I got few questions regarding EZNMR:
1. what "bg" stands for particularly in "11B bg/11B{1H} bg"?
2. which pulse sequence is meant by EXSY in the 2D menu?
3. If you press HALT in DEPT kind of experiments does the au program just execute "halt" (the number of scans is set as NS) or it does "stop" (the number of scans is finitely set by TD0)?
4. What is "Tips" (above)?

Thank you in advance!

Find below the answers to your questions.

2. The EXSY buttons sets up gradient NOESY sequences. In the case of 31P EXSY proton decoupling is used as well.

3. The HALT button starts a macro the issues the standard Bruker HALT command as well as print a message. It does not respect any phase cycling. It does not use the STOP command.

4. The "tips" switch turns on the feature that a short description of a button appears on the screen while the mouse cursor hovers over the button.

First of all i would like to thank you for the very interesting and helpful blog. I have a question about 31P EXSY, you made it just from simple gradient 1H-1H noesy pulse sequence by the changing of nucleus? Is it the same like with 1H-X HMQC, where you can take simple carbon HMQC pulse sequence, change nucleus and recalculate gradients for the new nucleus?

The 31P EXSY parameters were indeed derived from the 1H NOESY parameters by changing the nucleus and adding 1H decoupling.

The 1H-31P HMQC parameters were prepared from the 1H-13C HMQC parameters by changing the nucleus, gradient ratios and the relevant 1H-31P coupling constant used to calculate the delay in the sequence.