Two-dimensional 1H NOESY data are routinely used to assign specific stereo-isomers based on the proton nuclear Overhauser effects (NOE's) which are strongly correlated to inter-proton distances through space.  For example, NOE's may be observed for cis- protons across a double bond but not observed for trans- protons.  The same technique can be used with 19F in fluorinated compounds to gauge the inter-fluorine distance and assign stereochemistry.  The figure below shows the 19F NOESY spectrum of a fluorine containing cobalt complex. 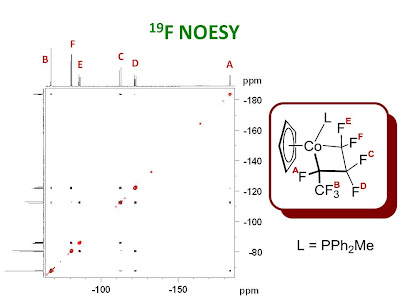 From the 1D-19F NMR spectrum, it is not clear which fluorine atoms are on the same or opposite sides of the four membered cobalt containing ring.  The 2D-19F NOESY spectrum, on the other hand, shows strong NOE cross peaks between fluorine C and both A and E indicating that C, A and E are on the same side of the ring.  There are also strong cross peaks between fluorine D, and both B and F indicating that D, B anf F are on the same side of the ring.
Thank you to Graham Lee (of Dr. R.T. Baker's research group at the University of Ottawa) for kindly providing the sample and sharing his data.
Posted by Glenn Facey at 3:32 PM

What mixing times are used for 19F NOESY experiments?

Eva,
It is best to use a mixing time close to the average T1 of the signals you are interested. See these posts: