The 19F - 13C HMQC spectrum of trifluoroacetic acid is shown in the figure below. 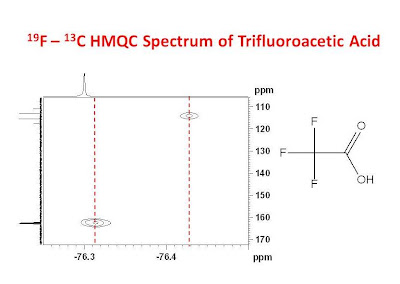 The data were collected with a delay appropriate for a 19F - 13C J  coupling constant between the 1JF-C coupling constant of 284 Hz and the 2JF-C coupling constant of 44 Hz.  The top and side traces are the one-pulse 19F and 13C spectra, respectively.  Why are the HMQC responses not at the same 19F chemical shift and why aren't they correlated to the peak in the 19F spectrum?  In order to answer these questions one must take into consideration the 19F - 12, 13C isotope effects.  The chemical shift of the fluorine depends on whether it is bound to a 12C or a 13C.  The effect is largest across one bond and gets smaller over multiple bonds.  The 19F NMR spectrum for trifluoroacetic acid is shown in the figure below with and without 13C broadband decoupling in the upper and lower traces, respectively. 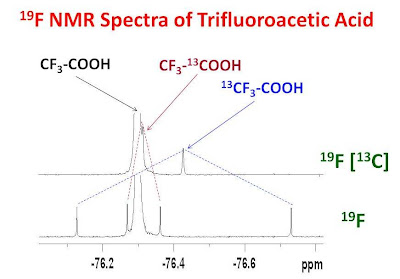 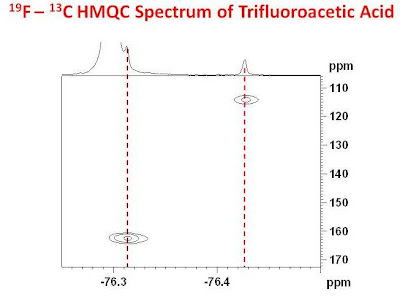 is there a rule of thumb for the isotopic effect regarding the direction of the shift and the mass of the formally exchanged isotop? e.g. would the 31P-Signal with a C13-neighbour always be at lower ppm compared to the 31P-Signal with a C12-neighbour? I recognized that in "Gottlieb JOC 1997"-NMR-solvent-summary all deuterated and not deuterated solvent signals share the same trend in 1H and 13C NMR (except 1H-Signal of C6D5H vers. C6H6). Is there a source for this kind of information?

The 13C isotopomers are indeed at lower chemical shift in the 31P spectra.

I do not know of a specific source to predict the isotope shifts however I suggest you search the publications of Cynthia Jameson in the 1980's.

Could you please tell me what is the 19F chemical shift of TFA in D2O. I find different values online and need to be sure since I'm using it as an external reference. Thank you.

Anonymous,
All I can say is that the 19F chemical shift of CF3COOH is approximately -76 ppm wrt CFCl3. The shift is affected slightly by solvent polarity, concentration etc... (see J.C. Sloop, Reports in Organic Chemistry vol. 3, pp 1-12, (2013)). If you cannot find precedent in the literature for TFA in D2O as a reference at the concentration you are using, I would measure the shift of your chosen reference sample with respect to a sample of which the chemical shift is known.
Glenn