The amount of NMR signal is expected to be proportional to the amount of sample inside the coil of the NMR probe.  As a result, the signal-to-noise ratio for samples run in NMR tubes with thick walls is expected to be lower than that for comparable samples run in NMR tubes with thinner walls due to a reduced filling factor of the NMR probe coil.  I was curious to see how much of a difference in signal-to-noise ratio there would be.  0.68 mL of  CDCl3 (99.8 % D) was put in 5 mm NMR tubes with wall thicknesses of 0.38 mm and 0.80 mm.  The NMR tubes were New Era Entepprises NE-MP 5 (4.20 mm ID) and Norell S-300 (3.43 mm ID), respectively.  The samples are shown here: 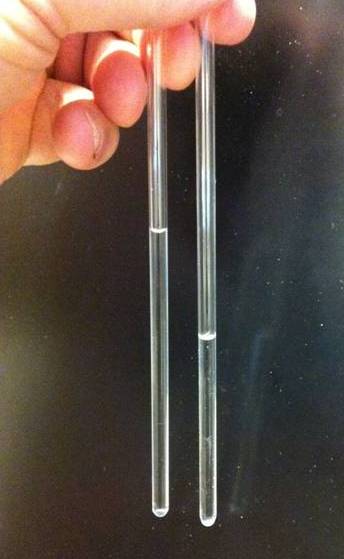 The height of the sample column for the thick-walled tube is obviously higher due to the smaller inner diameter of the tube.  In this case, much of the sample will be "invisible" to the NMR measurement as it is outside of the active NMR probe coil volume and therefore "wasted".  Single scan proton NMR spectra were run for these samples on a 300 MHz instrument.  A third sample was prepared by removing some sample from the thick-walled NMR tube such that the column height was equal to the sample in the thin-walled tube.  The volume for this sample was 0.45 mL and it was run under identical conditions to the other two.  Care was taken to shim the magnet and tune and match the NMR probe reproducibly.  The data, processed with 0.5 Hz of line broadening, are plotted side by side in the figure below: 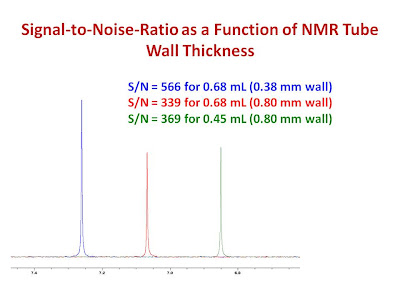 To be honest, I do not see the advantage of the thick-walled tube:
The reduced sample volume is compensated by the increased sample concentration needed such that the sensitivity-per-unit-mass is unaffected (as opposed to a Shigemi tube where the volume can be reduced at constant concentration).
It would be interesting, however, to repeat the experiment with a heavy salty/H2O/D2O sample. Here one would expect a substantial skin-effect that makes the use of a thick-walled tube advantegeous.

Thank you for your comment. After some thought, I agree with you about there being no advantage to using a thick walled tube compared to a Shegemi tube. I have removed that from the original post. Thank you very much.

I agree that it would be interesting to try a salty sample in both a thick and a thin walled tube.

Something that people don't know is that for many years a big manufacturer of NMR instruments was using ultra thin wall tubes (Wilmad 545) to run the S/N specifications tests on their instruments. Ultra thin wall tubes have a wall thickness of 0.29 mm and can hold 14% more sample giving 14% better sensitivity numbers. If you ever handled such a tube you will remember how fragile they are, they can literally brake just by touching them. They are practically useless for any other work but to push the sensitivity at a fixed concentration up by 14%. The use of such tubes was, of course, omitted from the specification sheets and when their competitors found it out the answer was "we use 5mm tubes, our instruments are just superior". It took quite a few years for the competitors to start using similar tubes for specification testing and to even out the field but the damage was done in the reputation of the company (this slow response to changing needs contributed to that competitor going out of business, eventually).
A potential advantage (actually the only advantage) of the thicker wall tubes is that they are more robust and will not break as easily in the hands of inexperienced people (students, for example). So there may be a practical benefit after all. Also thicker wall tubes may be better if there is a chance of gas being release by the sample, either by means of a reaction or my accidentally increased temperature resulting in the solvent boiling. A thin wall tube may break while on a thicker wall tube the cap may pop causing no damage (assuming, of course, that no tons of parafilm have been used to secure it on the tube).

P.S. Another idea for a blog post: how to reduce or eliminate CDCl3 evaporation through polypropylene NMR tube caps?

...Here theres a lab that uses 20% DCl as a solvent! practically this can put the instrument so far our of tune the ATMA algorithm will fail to find a dip to tune. This causes the automation run to come to a halt... Also, even when tuned the 90 degree pulse can be so long anything other than a 1d proton observe fails to work. Using a thick walled tube fixes these problems.

When running conductive samples in a cryoprobe; s/n can go down in thin walled tubes and is somewhat recovered in thick walled tubes.

Thank you for the experiment. I would expect that using thick-wall tube could be better if small amount of the sample is available since the concentration will be higher for 0,45 mL then 0,68 mL. Unfortunately, us you proofed experimentally that is fully compensated via the higher filling of the coil.

My question is on the filling factor of the probe. I hoped it is the probe characteristic given by its construction no matter as user will use it. I understand it as the ratio between the volume of the coil itself and the maximum volume which can be occupied by a sample. Is there a definition of the probe filling factor?

Anonymous,
As far as I know, your definition of the filling factor is correct.
Glenn