The phase of a signal in an NMR spectrum is described here and is determined by the axis on which the magnetization vector resides after the observe pulse relative to the receiver. The phase of the spectrum is typically corrected such that the peak in the real spectrum is entirely in absorption mode while that in the imaginary spectrum is entirely in dispersion mode. The correction in phase is referred to as the zero-order phase correction. A zero-order phase correction applies to all peaks in the spectrum regardless of their offset, Ω, from resonance. There are also first-order phase errors where the phase error for a resonance is linearly dependant on Ω and the duration of the pulse, tp. The further a peak is away from the center of the spectrum for a given pulse duration, the larger the first-order phase error. Similarly, the longer the duration of the pulse for a peak of given offset, the larger the first-order phase error. These errors arise from the fact that a 90° pulse of fixed duration is only a true 90° pulse for a peak on-resonance. For off-resonance peaks, the pulse will not only be slightly less than 90° but also produce a small amount of magnetization along the axis of the pulse. For example, a 90°x pulse applied to an equilibrium magnetization vector will produce only –y magnetization for an on-resonance signal but for an off-resonance signal, it will also leave a small amount of residual z magnetization as well as produce some x magnetization. It is the x magnetization that gives rise to the first order phase error. The effect of the pulse duration for a peak of given offset frequency is demonstrated in the figure below. The sample was a mixture of chloroform and acetone. The transmitter was set such that the chloroform signal was on-resonance. Six 90° pulses were calibrated at different power levels based on the on-resonance chloroform signal, ranging from 10 µsec in the lower trace to 320 µsec in the upper trace. For all spectra, the same zero-order phase correction was applied such that the chloroform signal was in-phase. No first-order phase correction was applied. One can see that the phase error in the off-resonance acetone signal increases as a function of the pulse duration. 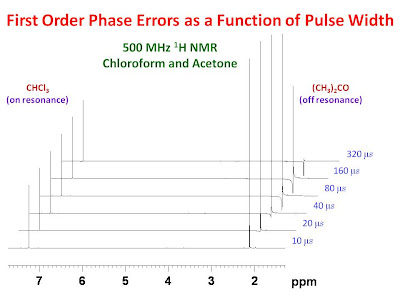 Well, with a little bit of geometry
and algebra, a real-world rectangular
pulse of length T can be modeled
at the first approximation order
as an infinitely perfect pulse
of zero length, followed by a 2T/pi
delay. The latter causes the observed
linear relationship between offset
and phase glitch.
It seems that the recent Bruker
pulse sequences take into account this
information in some way.