The excitation profile of an rf pulse is determined by its Fourier transform. The Fourier transform of rectangular pulses of monochromatic radiation, typically used in NMR measurements, are (sin(x) /x) (or sinc(x)) functions. The sinc(x) function has a large central lobe with satellite lobes of alternating positive and negative sign. In order to obtain uniform excitation and therefore quantitative data, one must ensure that the excitation pulse is sufficiently short to allow the entire spectral width of interest to fit within a small region of the central sinc(x) lobe. The pulse must also have sufficient amplitude to produce a 90° rotation of the magnetization. The excitation profile of four pulses is shown in the figure below. 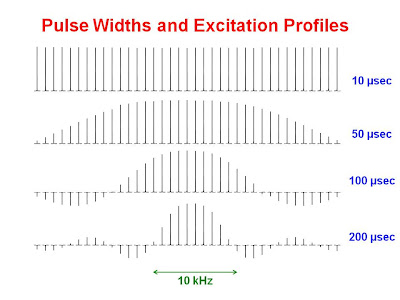 The data were obtained by measuring a 300 MHz 1H NMR spectrum of HDO as a function of transmitter frequency. The power level for each of the pulses was set such that the pulses provided a 90° flip angle for an on-resonance signal. Each spectrum was phased independently. The first zero crossings of the sinc(x) function are at + 1/(PW) and -1/(PW) where PW is the duration of the pulse. It is therefore important that the spectral width of interest be less than ~1/(10PW) to ensure uniform excitation. One can see that a 10 µsec pulse provides essentially flat excitation across 40 kHz whereas 50, 100 and 200 µsec pulses do not.
Posted by Glenn Facey at 3:44 PM

Can you recommend a good book that discusses this?

Often it is simply impossible to uniformly excite the satellite transitions as the quadrupolar coupling is too large. The breadth of the spectrum exceeds the bandwith of the probe. In such cases, spectra are recorded in "chunks" using the QCPMG technique to get the lineshape.

When looking at wideline spectra is it possible to set an output power so high that when looking at the FID or spectra that more than one peaks appears? I am guessing this would be due to the difference in the nutation frequencies?
maggie

Maggie,
I'm not sure I understand your question. Are you asking whether or not one can see more than one isotope in a spectrum? If so, the answer is yes. See this link:

Actually, I wasn't wondering about seeing another isotope. A while back, I was trying to find the 90 deg time for a sample (quadrupole - wideline)and saw that at larger pulse widths, there were 2 peaks rather than 1 at shorter pulse lengths. I was doing this at pretty high power, so I thought that this was the issue. I don't know if this makes sense or not.

The original post stated that the zero crossings of the excitation profile occur at plus and minus 1/(2PW). This was based on information in Neil Jacobsen's book, NMR Spectroscopy Explained (pp. 297-299). This disagrees with the information given in a book by Kenneth MacKenzie and M.E. Smith, Multinuclear Solid State NMR of Inorganic Materials (pp. 111-112) which state that the zero crossings are at 1/PW and not 1/(2PW). The latter agrees best with the data presented here and the original post was corrected. Thank you to Victor Terskikh for pointing this out. He explained the discrepency as follows, "The confusion seems to originate in the matter how the pulse is represented in sinc: if the pulse is -pw/2 to pw/2 (around zero), then the FT gives zero excitation at 1/pw. If the pulse is presented as from 0 to pw*, then FT gives a crossing at 1/2pw*. But in NMR the first case applies, while the second case is just the half of the real pulse pw*=pw/2"

Thanks for the great blog!

While the FT of the pulse gives a good approximation of the excitation profile it is not quite accurate. One way to think about the discrepancy is that while the frequency component at n/PW will undergo n complete cycles during the pulse, and therefore average to zero (essentially the information given by the FT), it is still present and will perturb spins precessing at that frequency. As the spins are perturbed, the total effect does not cancel.

The null points can be found by calculating the offset where the effective field strength is 4n times that on resonance (i.e. the spins precess some multiple of 2*pi about the effective field). The steps are given in e.g. Rule and Hitchens p. 295, showing null points at offsets of sqrt(16n^2-1)/(4*PW). The first null should therefore be about 0.97/PW so perhaps not critical when planning experiments!

Your blog is beautiful! Thanks!
May I leave one comment especially to this post. I know that almost in all NMR books it is written that excitation bandwidth depends on pulse length. Well it is correct ONLY if pulses are calibrated (let's say they are all 90-degree). I just want to stress, that excitation bandwidth determines ONLY by power and not by length. I know that experienced NMR people knew this, but from my experience I figured out that all students remember only phrase "the excitation pulse profile or bandwidth determines by pulse length" which is not true.
Simple example: if you compare two pulse 1. 1us pulse @ 100W 2. 100us pulse at 100W. They have approximately the same bandwidth.