The Fourier transform of a sinc function is a box function, so if a long low power sinc shaped rf pulse is used one obtains a narrow flat box shaped excitation profile. This is indeed the case as can be seen in the bottom trace of the figure below. The trace is composed of a series of 1H NMR spectra of H2O/D2O where a truncated, 200 msec, 10 cycle sinc shaped monochromatic rf pulse was applied with varying rf frequency offsets. One can see that the excitation profile is, to a good approximation, a narrow flat box function. The deviation from a flat box function is the result of the truncation of the sinc pulse. It should be noted that the phase of the resonances is not constant across the excitation profile. Sinc pulses are not frequently used for selective excitation because of the phase problem and the fact that very long, minimally truncated pulses must be used. A frequently used alternative to the sinc pulse for selective excitation is the Gaussian shaped pulse. The Fourier transform of a Gaussian is a Gaussian and one therefore will obtain a narrow Gaussian shaped excitation profile when a long low power Gaussian shaped pulse is used. This is shown in the top trace of the figure below. This trace is similar to the bottom trace except a 20 msec Gaussian shaped pulse (with truncation at 1 % of the total height) was used rather than a 200 msec sinc pulse. Although the excitation is not flat, the phase is constant across the excitation profile and the total duration of the pulse is 10 times shorter than the sinc pulse. 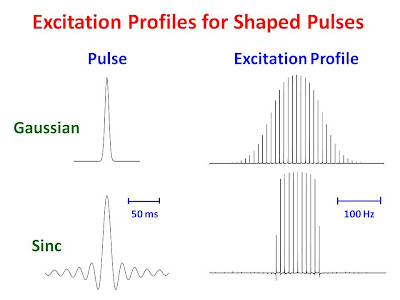 According to theory, an NMR excitation pulse has a defined frequency (such as 500MHz for 1H at a 500MHz spectrometer ;).
However, I also heard that people claim, that this is not what happens in reality. This picture is only used to describe the phenomenon mathematicaly.See Keeler's book as an example.
According to them, in reality, the pulse is composed of various frequencies (not only exactly 500MHz). The "harder" and shorter the pulse, the more frequencies are contained (centered around 500MHz). And it is only the frequency component of the pulse that matches exactly the resonance, which flips the resonance.

So what is true??

Anonymous,
Thank you for the question. A monochromatic excitation pulse of infinite length is the only pulse that contains a single defined frequency. While shaped pulses (or rectangular pulses of finite length) are composed of a single radio frequency (eg. 500 MHz), their shape (or edges) impose additions frequency components on the pulse. The frequency profile of the pulse is defined by a Fourier analysis of the pulse.

How to calculate the excitation width of a Gaussian shaped pulse?

Thank you for the question. The excitation band width (delta f) of a pulse is often defined as the frequency window over which the pulse is 70% effective. It can be evaluated as follows:

You can find a table of bandwidth factors for various shaped pulses in Timothy Claridge's book, High-Resolution NMR Techniques in Organic Chemistry (chapter 9).

Thank you for that straightforward explanation!