Much effort has been directed to obtain broadband 1H decoupled 1H NMR spectra.  The subject has been reviewed recently.1  One technique used to obtain such spectra is the pseudo-2D Zangger - Sterk method2,3 based on a selective refocusing pulse applied simultaneously with a weak field gradient centered in the t1 evolution period allowing all chemical shifts to be measured at the same time but from different slices of the column of sample in the NMR tube.  For each resonance, the coupling from all of the coupling partners is refocused.  The data are collected in a conventional 2D matrix however, a single FID is constructed by concatenating a chunk from each of the individual 2D time domain signals.  The Fourier transform of the reconstructed FID is a pure shift, 1H decoupled 1H NMR spectrum.  The PSYCHE (Pure Shift Yielded by CHirp Excitation) modification4 of the Zangger - Sterk method uses a pair of small flip angle, frequency swept chirp pulses rather than a selective 180° pulse applied simultaneously with the weak spatially selective field gradient.  This modification offers improved sensitivity.  The details of implementing this technique are kindly provided on-line by the Manchester NMR Methodology Group.  As an example, the figure below shows the 600 MHz PSYCHE spectrum of sucrose in in DMSO-d6, collected in less than 3 minutes.  One can observe the collapse of all multiplets into singlets. 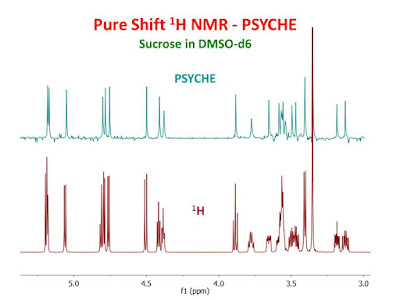 The PSYCHE technique can dramatically simplify complex 1H NMR spectra as shown in the figures below. The second figure is an expansion of the low frequency region of the first. 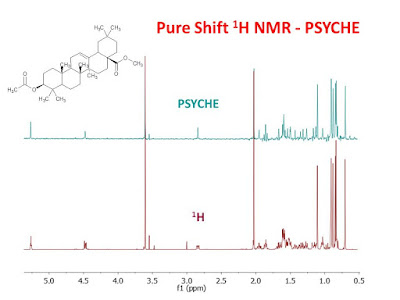 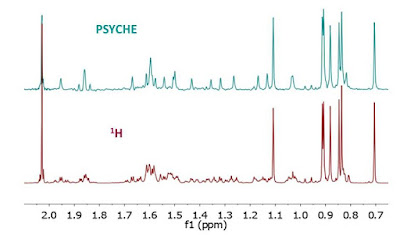 Thank you so much for this Sir. I work mostly with natural products and I bet pure shift experiments are going to really change things for structure elucidation when they become more common place. Explanation you provide here is really invaluable as most journal articles "wall up" valuable, transforming and revolutionary information in impenetrable jargon.