The effects of chemical or dynamic exchange on NMR spectra are very well known.  Exchange is often studied by observing line shape changes as a function of temperature, by 2d EXSY, inversion transfer or saturation transfer methods.  Effects due to exchange can also be observed in 1H - 13C HSQC spectra.  The HSQC method works by transferring 1H magnetization to 13C magnetization via an INEPT transfer through the one-bond J coupling across the 1H - 13C chemical bond.  The 13C magnetization evolves during the incremented delay, t1, of the 2D pulse sequence according to its chemical shift.  The 13C magnetization is then transferred back to 1H magnetization where is observed during t2.  HSQC spectra thus exhibit cross peaks between 1H resonances and the resonances of their attached carbons.  If there is exchange between nonequivalent carbon sites during t1, some 1H resonances may appear to be correlated to two carbon resonances.  An example of this is shown in the figure below. 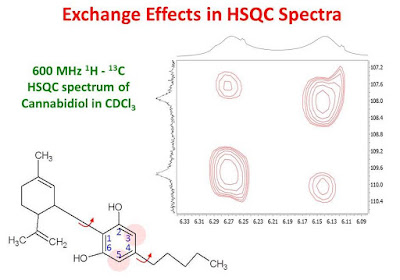 The 13C spectrum of cannabidiol has equally intense broad, resolved aromatic resonances for non-protonated carbons 2 and 6 (not shown) as well as for the protonated carbons 3 and 5.  The 1H spectrum has broad resolved resonances for both aromatic protons.  This indicates that either the aromatic ring undergoes 180° flips about the 1 - 4 axis or it has two equally probable rotomers defined by a rotation about the 1 - 4 axis.  In either case, the dynamic exchange is slow enough on the NMR time scale to produce resolved resonances yet fast enough to cause significant line broadening.  For each of the two aromatic protons, the HSQC spectrum shows correlations to both C3 and C5; a strong correlation to the carbon to which it is chemically bonded and a weaker correlation to the carbon site in exchange with its attached carbon.
Posted by Glenn Facey at 12:19 PM

I am new to HSQC and have one naive question. HSQC is specifically to detect the direct connectivity, for example, 31P-1H. but why cross-peak is still evident even 31P and 1H are 3 bonds away, such as H-C-O-P=O.

another question following is, the JP-H coupling constant of the above-metioned is 4-10Hz based on literature. however, I ran an array test with HSQC sequence, and measured J is 45 Hz. What is the reason?

Regarding your first question: there is nothing magic about the connectivities present in HSQC / HMQC spectra. They depend on the delay in the sequence for coupling to evolve. See for example these 31P-13C HMQC spectra.

Cross peaks will show up for all connectivities which even roughly correspond to the coupling evolution delay in the pulse sequence. One can even see one-bond 1H - 13C correlations in HMBC data optimized for smaller multiple bond 1H-13C coupling constants.

Regarding your second question: what parameter in the sequence did you array? How did you arrive at a coupling constant of 45 Hz?