The phase of an NMR peak depends on the sine/cosine character of the free induction decay (FID) when the receiver is turned on.  Positive and negative cosine FIDs will yield positive and negative in-phase peaks, respectively whereas positive or negative sine FIDs will yield peaks 90° out of phase.  FIDs that are neither a pure sine nor pure cosine with yield peaks which are out of phase to an extent dependent on the cosine/sine character of the FID.  In a perfect world, the receiver is gated on immediately after a perfect 90° pulse and all FID’s are cosines producing positive in-phase NMR peaks.  In the real world however, there are problems with acoustic ringing, pulse breakthrough imperfect pulses of finite duration and finite electronic switching times.  These problems produce a dead time between the end of the pulse and time at which the receiver is gated on during which data cannot be collected.  As a result the FID may not be a perfect cosine function and a phase correction will need to be applied after Fourier transform.  The first two figures below illustrate this point for a single off-resonance NMR signal as the dead time is increased.  The first figure shows the FID’s as a function of increasing dead time from bottom to top while the second figure shows the Fourier transformed spectra without phase correction as a function of dead time from left to right. 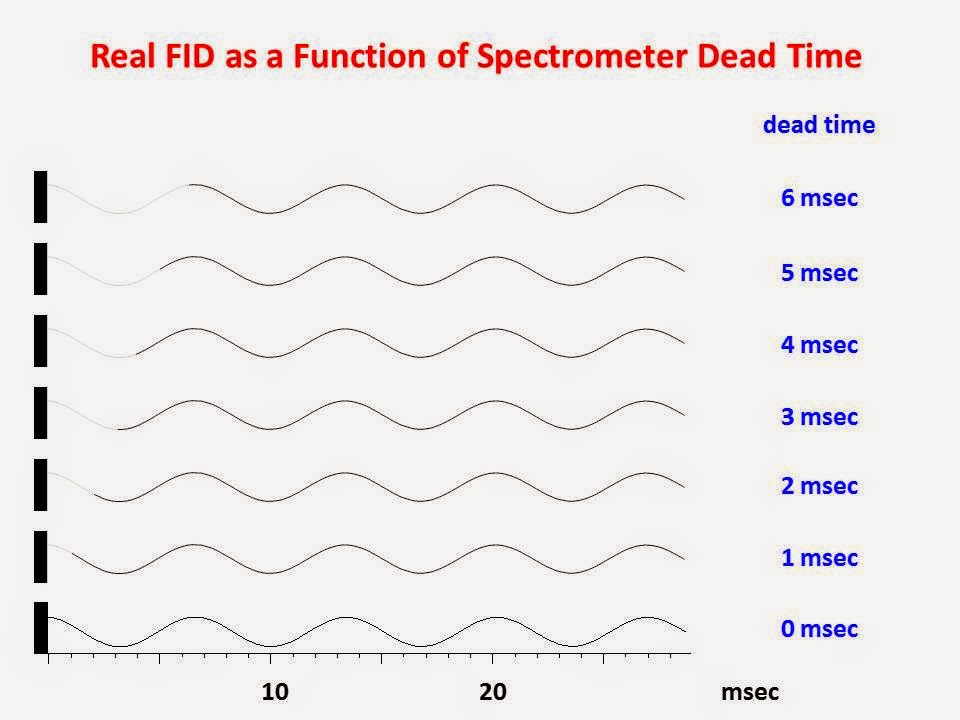 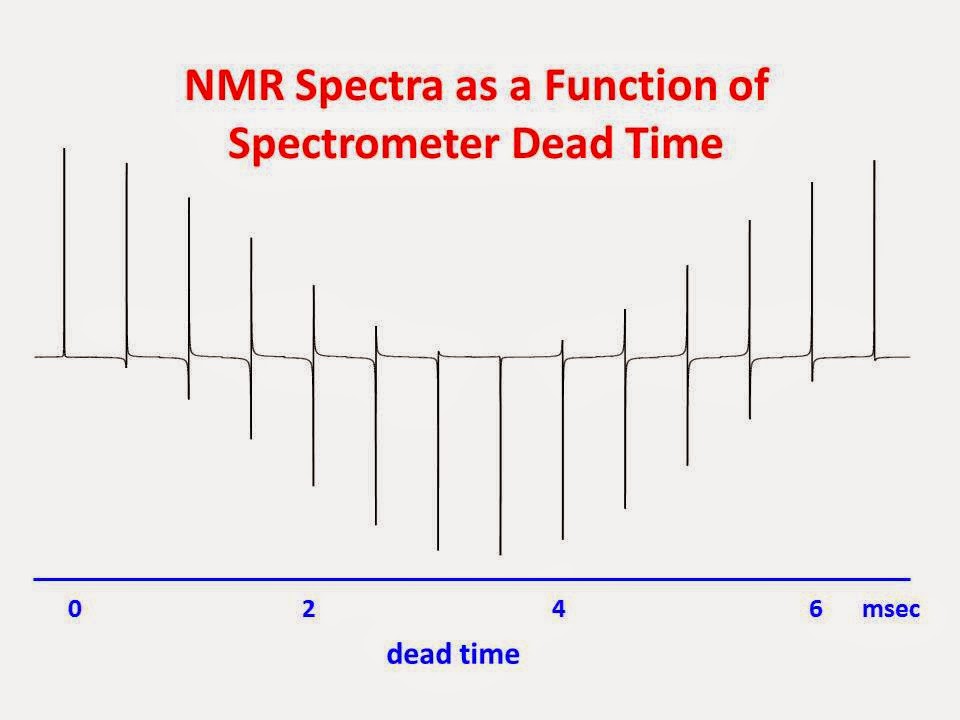 When there is more than one signal, the FID is an interferogram representing the sum of all time domain signals, each with a different frequency.  Since each component has a different frequency, its phase is affected to a different extent as a result of the dead time.  Higher frequency time domain components  (i.e. those representing peaks further off-resonance) are affected more than lower frequency components (i.e. those representing peaks closer to being on-resonance).  This is illustrated in the figure below for the 1H NMR data for p-xylene.  The left-hand portion of top panel of the figure shows the FID containing both methyl and aromatic components while the right-hand portion of the top panel shows an expansion of the initial portion of the same FID.  The bottom panel of the figure shows a stacked plot of the NMR spectra collected as a function of dead time.  One can see that the phase of the aromatic peak furthest off-resonance is affected to a greater extent by an increased dead time than the methyl peak closer to resonance. 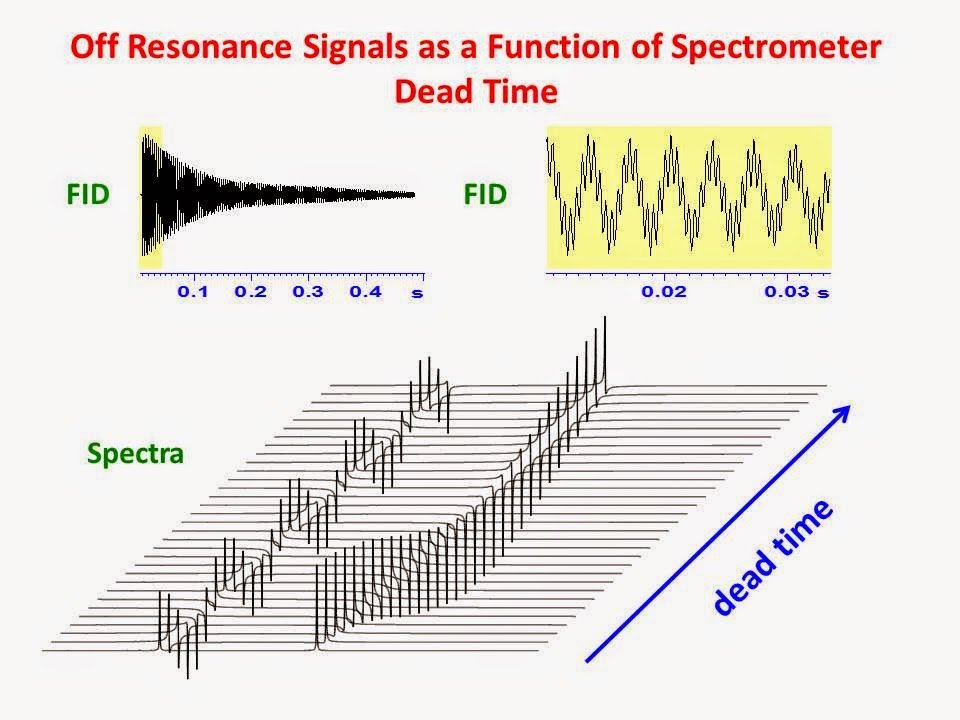 The last figure also shows a stacked plot of the 1H NMR spectra of p-xylene as a function of dead time. 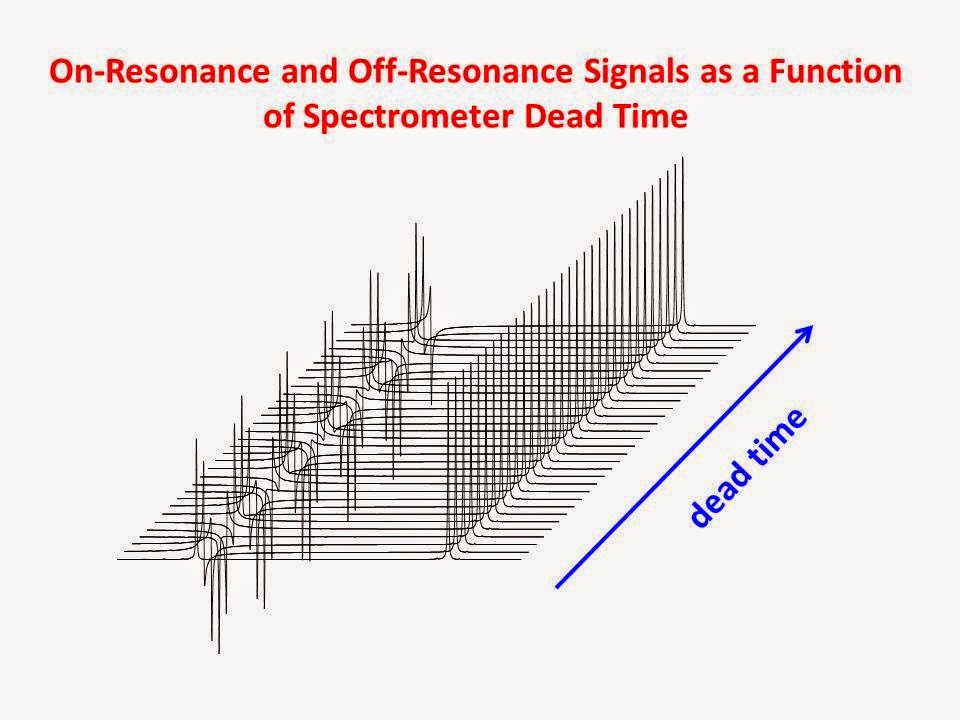 Thank you to Dr. Michael Lumsden of the NMR Facility of Dalhousie University for suggesting the subject of this post.
Posted by Glenn Facey at 12:12 PM

Dear Glenn Facey,
I acquired an Al27 NMR on my sample. The spinning speed is 27.5KHz. Dwell time is 0.8us. Deadtime is 8us. I lost some FID points at the beginning of my signal. And now it's hard to phase my spectra properly, especially the spinning sidebands. Could you please inspire me on how to phase it correctly?

Bottle,
Phasing and baseline problems are very common in solid-state NMR spectra acquired with short dwell times due to probe ringing or dead time problems. You can delete the bad points at the beginning of the FID and FT the it. Phase the intense centerband with zero-order phase correction and phase the sidebands with first order phase correction. The first order correction will likely be very large and will leave your spectrum with extreme baseline problems. These problems can be corrected with a baseline correction routine applied to the spectrum. You may have better luck by using backward linear prediction to predict the bad points in the FID. Another option is described in this post: