The appearance of the 1H NMR signals of protic samples in aprotic solvents depends critically on the concentration of the sample. The -OH, -NH2 or -COOH signals can have chemical shift values and line widths over a wide range due to varying extents of hydrogen bonding and chemical exchange. The concentration can also determine whether or not one is able to observe J coupling between and -OH proton and other protons in the sample. An example of this is illustrated below. The figure shows the spectrum of methanol in deuterated acetone. The spectrum on the top is that of concentrated methanol and it consists of two singlets. In this case the methanol molecules are hydrogen bonded to one another and the -OH protons are undergoing fast exhange with one another. The spectrum on the bottom is that of very dilute methanol. It is a second order spectrum with two signals approximating a doublet and a quartet due the J coupling between the methyl protons and -OH proton, respectively. Note that the chemical shift of the -OH proton is much lower for the dilute methanol compared to the concentrated methanol. In this case the methanol molecules are not hydrogen bonded to one another and there is no (or very slow) exchange among the -OH protons between molecules allowing for the observation of the J coupling. 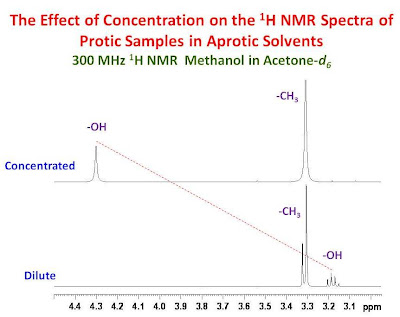 Glenn,
What I do not understand is why there is no high frequency shift due to hydrogen bonding of the methanol to the carbonyl oxygen of the acetone.

Maybe there is a high frequency shift of the -OH proton of methanol due to the hydrogen bonding to acetone. It would be interesting to observe the -OH resonance of methanol in benzene-d6 where one would expect no hydrogen bonding. Perhaps the shift is much lower than it is in acetone-d6.

The OH proton chemical shift for dilute MeOH in chloroform is only 1.1 ppm. I guess I expected stronger H-bonding to acetone than to another methanol.

Further to my previous comment, I ran the 1H NMR spectrum of dilute methanol in benzene-d6. The chemical shift of the -OH quartet was about 1.74 ppm lower than shown in the figure of the BLOG post (dilute methanol in acetone-d6). Some of this effect may be due to the ring current effects of benzene and it may be a better idea to run it in a solvent like dry CD2Cl2 but I suspect that at least some of the shift is due to the fact that the -OH protons are not hydrogen bonded to the solvent.

:) Nice to see an example of this! I've spent many an hour trying to get a nice 'textbook' spectrum of some simple compounds for our teaching labs.
To get a nice looking spectrum with decent lineshape and couplings of the protic samples sometimes required tipping the tube upside down, shaking the sample out and then re-diluting the drop that remained...

And then there are those that question their result based on a comparision to a reference spectrum run on a 100Mhz; prepared at a high concentration.

Also the spectra can be dependent on amount of water present in the samples. I was asked to run methanol in CDCl3, and to get the CH3 to OH coupling required drying the solvent, methanol and the NMR tube.

It just goes to show the laws of physics ensures the instrument always gives a correct result, but sometimes the chemist has to shift their perspective to see it!