Presaturation is a common method of reducing the water signal in the 1H NMR spectra of aqueous samples. Sometimes, a sample may contain more than one undesirable resonance which a user may want to presaturate. In such a case, one must presaturate at multiple frequencies simultaneously. On a two-channel Bruker spectrometer, two signals can be presaturated. This is accomplished by using both Signal Generation Units (SGUs). One of the undesirable signals is put on-resonance and is presaturated with the signal from SGU1 after which the hard pulse is given (also through SGU1). The second undesirable resonance is presaturated using SGU2. The configuration is as follows: 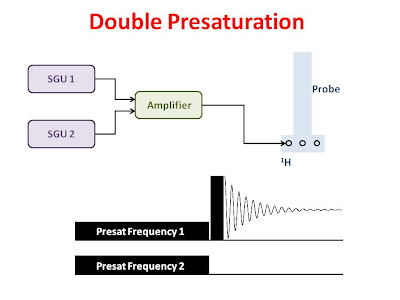 If one has a three-channel system, one can presaturate three resonances using three SGUs. The figure below shows an example of double presaturation on a two-channel system. 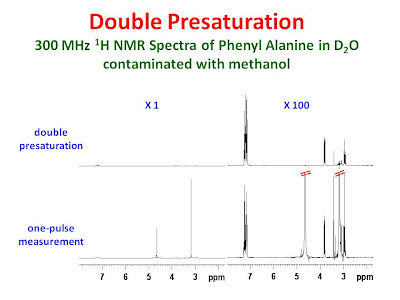 The sample consisted of phenylalanine dissolved in D2O contaminated with methanol. The one-pulse spectrum in the bottom left panel shows the intense HDO and methanol signals. The double presaturation spectrum in the top left panel is on the same vertical scale as the one on the bottom left. One can see that both solvent signals have been almost completely eliminated. The spectra on the right-hand side are the same data as on the left except the vertical scale has been increased by a factor of 100. You can try this on your Bruker spectrometer using the pulse program "lc1prf2".
Posted by Glenn Facey at 2:31 PM

iVery cool. I didn't know this and with poor quality CD3OD you need it for both peaks...Can you do any more than 2 resonances when using a standard Bruker instrument?

Using this method, you can presaturate as many resonances as the number of available channels on the spectrometer.

An alternative for multiple signal suppression (in addition to WET) would be to add presaturation to the excitation sculpting sequence (zgesgp for Bruker), set the o1 on the weaker signal and apply the shaped pulse off resonance on the stronger one (H2O). Using this approach I was able to collect excellent 1D and 2D homonuclear spectra on aqueous samples containing from 0 to 90% unlabeled Trifluoroethanol (TFE) and 5% D2O. You will need to adjust the phase of the shaped pulse with gs to get it to work properly though. If you are really feeling fancy you can also apply 13C decoupling to remove the natural abundance 1H-13C coupled signals which can get to be bigger than your actual sample.

How about suppressing solvent peak from Carbon spectrum?

There is no reason in principle why one could not suppress thw 13C signals of protonated solvents with presaturation if 1H decoupling is also applied. I suspect that if one wanted to suppress the 13C signal of a deuterated solvent that the carbon deuterium coupling may be an issue.

Dear Glen,
I've tied to run this experiment on my AV III spectroemter.
Unfortunatell, I can not start aqusition - after zg IPSO memory starts loading and it's loadind and loading till the "time out on IPSO" information.
Have any suggestion what is rong? Could anybody to help me to solve this problem, please.
Slawek

Is your routing set up correctly through "edasp"? SGU1 (F1) and SGU2 (F2) should be set up for 1H and go through the same 1H amplifier.

Glenn, of course the routing setup is done. I hope correctly. If not, it would not be possible to run "getprosol".
It is the same routing like for homodecoupling experiment. This experinent works correctly, so I think that there is something in the pulseprogram.
Do you use original program from bruker library or some modifications were made?
Slawek

I used the library program without modification however I have used it only on AVANCE and AVANCE II consoles.

Dear Glenn,
the problem was with the "a little strange" (non-standard) configuration of the spectrometer I used to run this experiment. On other spectrometers everything is OK!
Thanks for discussion.
All the best.
Slawek

This method, although simple and easy to understand, is a bit wasteful on spectrometer resources. You do not really need two separate, full frequency sources to generate two very close together frequencies when you have a phase shifter down the RF path. What you need to do is to add a phase ramp to the main signal with a phase twist frequency equal to the distance of the second solvent. This will effectively look exactly the same at the probe as two frequencies generated by two separate synthesisers. The beauty of the method is that you can convolute as many frequencies as you want this way by adding more phase ramps. The whole presat period needs to be replaced with a shaped pulse of duration equal to the presaturation delay where all the phase ramps are convoluted. The beauty of the method is that, apart of the unlimited frequencies to presat, you cal also adjust the amplitude for each individual frequency.
Of course if you have to remove so many frequencies you are better off going back to the lab and cleaning your sample. But the whole thing reminded me of the urban legend than when space flight began they saw that ordinary pens did not work without gravity. The Americans invested millions devising a pen that did work at zero g while the Soviets used a pencil...

Anonymous,
Thank you for your comment. Great information!
Glenn

Is it possible to perform an HSQC experiment with presaturation of water and DMSO simultaneously on a Bruker 500 MHz spectrometer?

Anonymous,
Yes, with the proper hardware and pulse sequence.
Glenn