The Carr - Purcell - Meiboom - Gill (CPMG) sequence is used to measure T2 relaxation times and more recently has made an impact in measuring the line shapes of very broad solid lines by breaking them up into spikelet patterns which mimic the static line shape. The very simple pulse sequence is shown here: 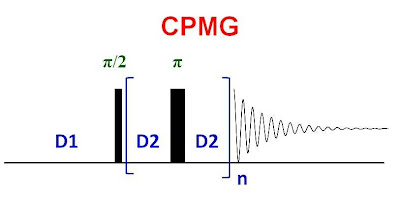 During the (D2 - π -D2)n period the intensity of lines with short T2 (broad lines) diminishes much more quickly than that for lines with long T2 (sharp lines). The CPMG sequence is therefore useful for enhancing the sharp features in a spectrum by suppressing the broad features. This is demonstrated in the figure below. The top panel of the figure shows a portion of a conventional 500 MHz 1H NMR spectrum of a polymer sample contaminated with small amounts of smaller molecules. The broad lines (truncated in the figure) are due to the polymer whereas the much smaller sharp lines are due to the impurities. The bottom panel of the figure shows the CPMG spectrum of the same sample with D2 = 4 msec and n = 32. One can see that the broad polymer lines are greatly suppressed and the smaller sharp lines are much more obvious. 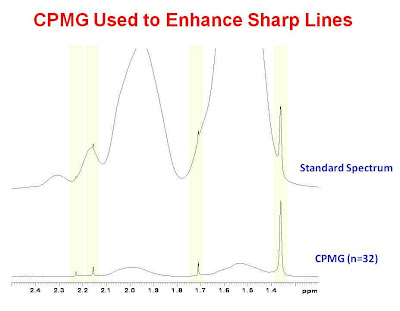 In the sequence you've drawn a single acquisition after the train of pulses. What is the advantage of this over a Hahn-echo? Is it simply the ability to better balance the T2 and diffusion rate differences of the two species in order to optimally "filter" the signal(s)?

I don't think there is any advantage to using the train of pulses I have shown here vs a single 180 degree pulse with longer D2 delays. Both methods will suppress the broader lines according to their T2's.

There is a difference between a pulse train and a single 180 if exchange processes on a millisecond timescale are involved. For proteins, exchange contributions to R2 can be measured using CPMG techniques where the number of 180 degree pulses is varied.

Yes, and there is also a difference if there is a significant amount diffusion during D2.

Would this pulse sequence tell the presence of micelles, based on mobility? What do you expect for a long chain alkyl chain, do you expect the ch2's to attenuate quicker or the ch3's?

I'm curious about that "n" parameter. Could you explain how does it work?

I understand that the echo will be repeated "n" times. Is that how you measure T2 relaxation? Or is it by chaging the D2 time?

Increasing n effectively increases the time allowed for broad resonances to decay based on their T2. Only the last echo is Fourier transformed. See the previous comments on this post. This method can also be used to measure T2.

CPMG as T1ro spin-lock are used for the arguments proposed, than is it reasonable to think that a series 180 degree pulses "increase" the relaxation properties (T2) of molecules, due - probably - to T1ro effect?

Anonymous,
I'm not sure what you mean by increasing the relaxation properties? Are you referring to T2 vs T2*?