The quadrupolar Carr-Purcell-Meiboom-Gill (QCPMG) sequence can be used to measure the NMR spectra quadrupolar I = n/2 nuclei in the solid state. This technique is essentially a T2 sequence where a series of echos are collected. The entire echo train represents the time domain data and is Fourier transformed to produce a frequency domain spectrum. The QCPMG spectrum consists of spikelets separated in frequency by the reciprocal of the time separation between the echos in the echo train. The intensity envelope of the spikelets mimics the static line shape. This is analogous to the rotational echoes in the FID's of MAS data and the associated spinning sidebands in the frequency domain MAS spectra. The QCPMG technique represents an improvement in sensitivity compared to a single conventional Hahn echo as the intensity is concentrated in the spikelets rather than spread across the entire frequency span of the spectrum. The figure below shows the pulse sequence, an echo train and a QCPMG 23Na spectrum of solid sodium sulfate at 4.7 Tesla. The 23Na Hahn echo spectrum is also ahown as a comparison to the QCPMG spectrum. The spectrum represents the central transition only. The satallite transitions are not visible. 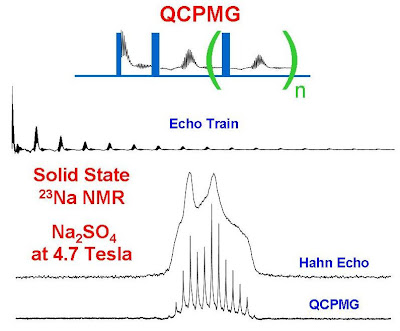 Thank you.
One question, what's the real
difference between QCPMG and CPMG?

Thank you for the comment / question. There is no real difference between "QCPMG" and "CPMG". The "Q" stands for quadrupolar and is used when the CPMG sequence is applied to quadrupolar nuclei.

As Glenn has correctly pointed out, there is no major difference, however the QCPMG sequence usually has a 16-step phase cycle which is intended to give better results for quadrupoles.

Glenn, which system did you run this on (specifically what type of console and software)?

I collected the data on a Bruker AVANCE III console with TOPSPIN 2.x.

So when does aquisition actually start to get the train of echoes? After the first echo (1st 180 pulse) and then within the loop?

can you recommend any papers that implement qcpmg and frequency shifting to cover large linewidths?

Here are a few:

Nice article!
My simple question is: Why use QCPMG if conventional MAS would also yield spikelets mapping out the static lineshape?
thank you for your time!

Thank you for your very good question. When one collects MAS NMR data for half integer quadrupolar nuclei, one (most often) does not get a sharp centerband nor sharp sidebands as MAS is not sufficient to average out the second order quadrupolar interaction. The MAS lineshapes are actually rich in information. Since the MAS lines are broad (and not spikelets) the static spectrum will not be reproduced efficiently by the sideband intensity manifold. The width of the QCPMG spikelets, on the other hand, depends only on the true T2 (not the T2*) of the nucleus which can often be long enough to produce sharp spikelets.

I have more of a trouble shooting question. I notice that when using QCPMG distortion such as sharp spikes sometimes appear in the middle of the spectrum (O Hz or where observed freq. is defined). Does anyone happen to know why that might be happening? I know there isn't any arcing and that my 90/180 deg. pulse widths are okay.

This could be caused if you have a DC offset on all of your echoes producing something analogous to a quadrature spike. See this post.