I was once asked by an inorganic chemist: why do I have two THF signals in the spectrum of my compound dissolved in THF-d8? Many inorganic compounds crystallize with complexed solvent molecules as a fundamental component of their structure. This is particularly true of tetrahydrofuran (THF). The complexed solvent molecules are released when the solid compound is re-dissolved in solution and can easily be detected by high resolution NMR. The figure below shows the 500 MHz 1H NMR spectrum of an inorganic compound containing complexed THF which was re-dissolved in THF-d8. One can see the spectrum of the residual protons of the THF-d8 solvent and the spectrum of the complexed THF that was released when the solid was dissolved. The signals are separated due the isotope effect. 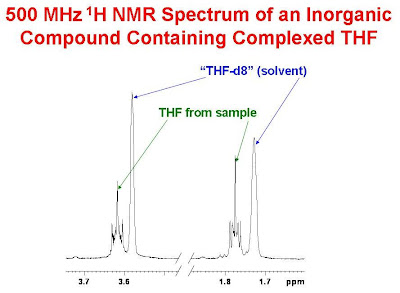