The Effect of Dissolved Oxygen on Relaxation Times

Proton T1 relaxation occurs, to a very large extent, due to inter-proton dipole-dipole interactions and their time dependence as a result of molecular motion. Potentially, there is also dipole-dipole interactions between protons and unpaired electrons which also contribute greatly to proton relaxation. In fact, for 13C NMR, paramagnetic materials are sometimes added to the sample to make relaxation more efficient. Dissolved molecular oxygen from air is a paramagnetic material that is often overlooked. Like other paramagnetic materials it contributes significantly to the relaxation rate of protons. It can be eliminated from NMR samples by simply bubbling nitrogen through the sample for a few minutes or freeze-pump-thawing the sample a few times. The following data show the effect of dissolved oxygen on the proton relaxation times of ethyl acetate in acetone-d6.

One can see that the relaxation times are nearly 100% longer when oxygen is eliminated from the sample. The figure below shows the proton T1 inversion recovery measurement for the acetate methyl singlet of ethyl acetate for the same sample before and after nitrogen was bubbled through the solution. 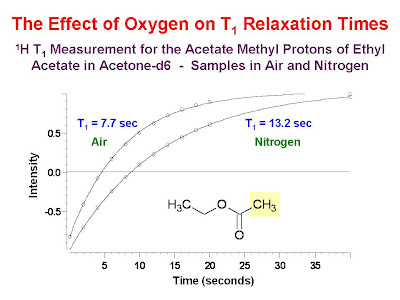 Hi Glenn,
Thanks for your blog. I read it as soon as I can to increase my knowledge in NMR.
REading this article, I was wondering if bubbling O2 in a solution could be an efficient way to decrease T1 relaxation ? I sometimes analyze silicons and T1 are quite long...
Thanks in advance !
Julien

Thank you for the question. Yes, bubbling oxygen to saturate the solution should reduce the 29Si T1's for direct observation.