In theory the echo occurs when delay1 = delay2. Often, this is not quite correct in practice due to the pulses having finite duration and short hidden pre-acquisition delays before the receiver is turned on. It is a good idea to set delay2 < delay1 so that the entire echo is captured. In such cases it is important to discard the data before the top of the echo before Fourier transformation. Failure to do so will result in improper line shapes (in the case of broad lines) or phasing errors. The figure below shows the 2H quadrupolar echo data for perdeuterated PMMA. The effect on the line shape is shown when the data are Fourier transformed before the echo (top trace) and after the echo (bottom trace). The correct line shape is only obtained when the data are Fourier transformed precisely at the top of the echo (middle trace). 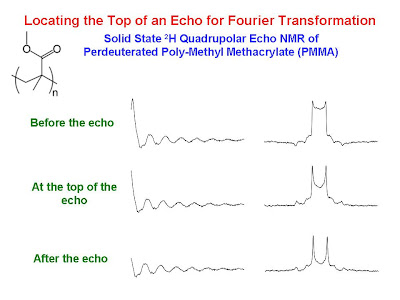 Another alternative is to make the first delay sufficiently longer than the second (at least T2* longer) and collect the whole echo. This should require no zeroth order phase correction, only a first order correction which can be calculated "exactly" a priori, minimizing the possibility of "incorrect" phasing. Or one can just do a magnitude calculation of the same whole-echo data.... For cases where T2 is long compared to T2*, one can get the equivalent increase in SNR as obtained by doubling the number of coadded transients, with little effort.

Glenn, My experience is "zero" with this experiment and I'm curious about the shifting of the fid to the top of the echo. Obviously, you're limited in the shift increment by your dwell time. Is the dwell time such a small percentage of the tau delays that this is not an issue? What about the process of oversampling and subsequent decimation; does this create any issues in processing the experiment?

Thank you for your comment. Making the first delay longer than the second as you suggest is the same as making the second delay shorter than the first as I stated in my post. I agree that taking a magnitude calculation of the whole signal, before and after the echo, is great for boosting the S/N (mmmmm perhaps a good BLOG post for the future) but often one requires phased data as is the case for the solid state quadrupolar echo data shown in the figure.

Again, such a wonderful site!!

I always make my final tau shorter then the second to catch the echo maximum in my deuterium quad echo experiments.

That said, it's still difficult to correctly phase the data (especially at lower temperatures). I've heard a lot of mystical fixes for this problem such as detuning the probe etc... none of which actually work more than once. I find it's best to phase on the fid (showing the real and imaginary component maximize the real and minimize the imaginary). If this still doesn't work and you have only a quadrupolar interaction dominating your lineshape, zero the imaginary data and then FT, you will be left with a perfectly phased (because we're basically cheating, but thats ok if the conditions i mentioned above are met) spectrum!

Thank you for your comment. It sounds to me as if you are talking about the symmetry of the spectrum rather than the phase. Zeroing the imaginary channel has the effect of making the Fourier transformed spectrum symmetric about the carrier frequency. You can also accomplish this AND increase the signal-to-noise ratio by a factor of the square root of 2 by reversing the spectrum and adding it to itself. See this BLOG post: