The Importance of a Proper Hartmann-Hahn Match in CPMAS NMR

Cross polarization (CP) occurs when the Hartmann -Hahn condition is met by way of the dipolar coupling between the abundant isotope and the dilute isotope. The Hartmann -Hahn match is very sensitive to power levels when the dipolar coupling between the abundant and dilute isotopes is comparable to the MAS spinning speed. The matching curve in this case is separated into a series of minima and maxima. In some materials, the dipolar coupling between the dilute nuclei and the protons can be very dependent on the chemical environment of the dilute nucleus. In such materials, the appearance of the spectrum is very dependent on the quality of the Hartmann-Hahn match. Differences in the spectra as a function of the Hartmann-Hahn matching condition can be used to learn something about the heteronuclear dipolar coupling for different chemical sites. In the figure below, the 29Si CPMAS spectrum is shown for the mineral sepiolite with and without a proper Hartmann-Hahn match. There are three resolved sites with intensity ratio 1:1:1. Once can see that when the Hartmann-Hahn condition is slightly off, the intensity of one of the sites is drastically reduced with respect to the other two. 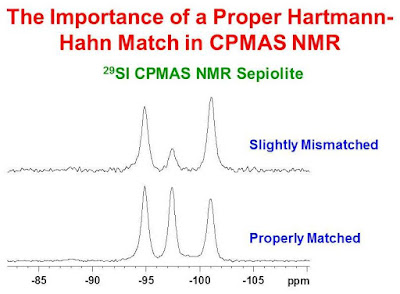