Some students treat 2D NMR like a mysterious black box. Making the connection between how 1D NMR and 2D NMR experiments are conducted is not really that complicated. I hope that this explanation helps.

A 2D pulse sequence is simply a 1D pulse sequence with an incremented delay. In fact, one can think of a T1 measurement as a simple 2D sequence (where in this case only one set of Fourier transforms is calculated). A 2D pulse sequence can be divided into 3 periods; preparation, evolution and detection as can be seen in the figure below. 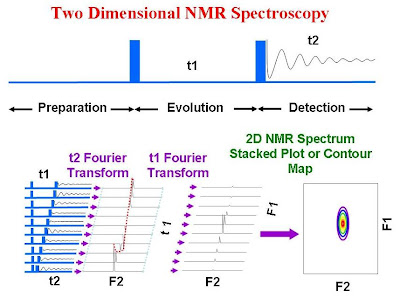 These periods can consist of a series of pulses, delays and/or gradients suitable to the property of the spijn system being measured. In 2D NMR, a series of FIDs are collected as a function of the evolution time, t1, to get signals, S(t1,t2). Each of these FIDs is Fourier transformed with respect to t2 to give a set of 1D NMR spectra, S(t1,F2). This series of spectra is encoded with information about what happened during the evolution period. The information can be decoded by doing a second Fourier transform with respect to the evolution period, t1. Corresponding points in the NMR spectra, S(t1,F2) are plotted against t1. The resulting interferograms are Fourier transformed to give a two dimensional stacked plot or contour map, S(F1,F2). This is the 2D spectrum.
Posted by Glenn Facey at 1:29 PM