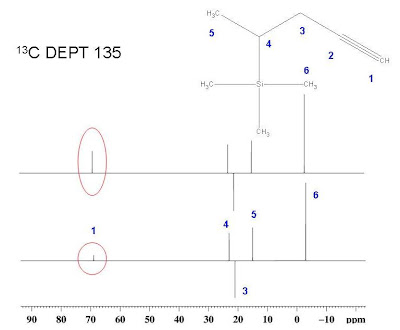 In the lower trace of the above figure is a simulated DEPT 135 spectrum of the indicated fictitious molecule with the one bond carbon-proton couplings set to typical values as follows:
1 250 Hz
3 125 Hz
4 125 Hz
5 125 Hz
6 118 Hz
Note that the terminal alkyne signal is very small. In a real spectrum, this signal could easily be lost in the noise. The upper trace is a similar simulated spectrum where all of the couplings were set to 145 Hz (note the gain in signal strength for the terminal alkyne resonance). Take note that the silyl methyl signals suffer less from this effect than does the terminal alkyne as its coupling constant is much closer to 145 Hz than that of the terminal alkyne.
Take-home message - Expect attenuation in carbon signals in a DEPT spectrum if the one bond carbon-proton coupling constant differs significantly from 145 Hz.
Posted by Glenn Facey at 1:43 PM