Yesterday, an observant student asked me why she frequently sees a small peak in the triplet for CDCl3 in the 13C spectrum. 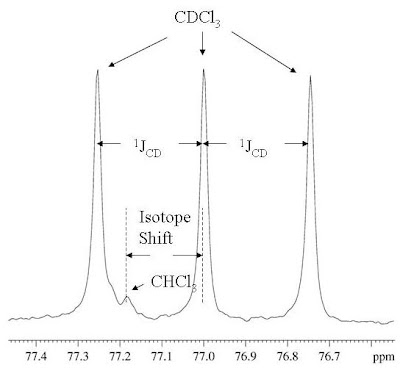 The small peak is due to a small amount of CHCl3 in the CDCl3 solvent. The CHCl3 signal is a singlet because proton decoupling was used to collect the data. The CDCl3 signal is a 1:1:1 triplet due to the J coupling to the deuteron which is a spin I=1 nucleus having three energy levels. The chemical shift difference between the CHCl3 and CDCl3 isotopomers is called an isotope shift.

Dear Sir
Recently I am observing uneven intensity ratio among triplets. That is middle peak of triplet is shorter that side peaks in SEFT experiment.
What might be the reason for this?

I assume you are referring to the CDCl3 triplet. You may see the type of intensity distortion you describe if the 13C 180 degree pulse in the SEFT sequence is not calibrated well. Is your probe tuned and matched well?

Hello,
Thank you for the explanation. It is very helpful. I was wondering if you would be able to explain why I see a triplet/multiplet (three but the software recognises it as a multiplet) in the H NMR of methyl isocyanide? the integrations are 0.95:1:0.95
Thanks in advance!

Thank you for the question. The triplet you see is coupling between the protons and the quadrupolar 14N (spin, I=1). Such splittings are also seen in the 13C spectra of tetra-alkyl ammonium salts. See this link.

The intensities are not exactly 1:1:1 due to differing relaxation rates between the 14N energy levels. This is shown dramatically for the case of 13C-59Co coupling shown in this link.

Hello
I would ask you why th intensity of peak in 13C NMR don't refer to the proportion of an isomer for example like in 1H NMR?
thank you very much
slamasouma@gmail.com

If I understand you correctly, I think you are asking why are 13C NMR spectra not quantitative. If this is the case, I direct you to this post:

Dear Sir
Can you please explain the number of peaks and those intensity in the 13C NMR of CD3Cl...

Pi,
The 13C of CDCl3 is bonded to a single 2H. 2H is a spin, I=1 isotope with three Zeeman energy levels. The 13C "sees" the 2H in each of its nearly equally populated energy states and thus appears as a triplet of lines with equal intensity separated by the 1J (13C-2H) coupling constant.